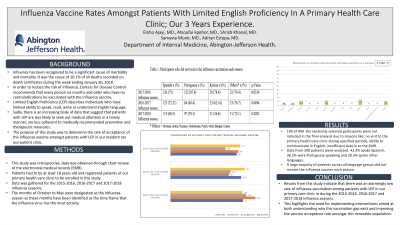 Background: Influenza has been recognized to be a significant cause of morbidity and mortality. It was the cause of 10.1% of all deaths recorded on death certificates during the week ending January 20, 2018.In order to reduce the risk of influenza, Centers for Disease Control recommends that every person six months and older who have no contraindications be vaccinated with the influenza vaccine.
Limited English Proficiency (LEP) describes individuals who have limited ability to speak, read, write or understand English language. Sadly, there is an increasing body of data that suggest that patients with LEP are less likely to seek out medical attention in a timely manner, are less adherent to medically recommended preventive and therapeutic measures. The purpose of this study was to determine the rate of acceptance of the Influenza vaccine amongst patients with LEP in our resident ran out-patient clinic.

Methods: This study was retrospective, data was obtained through chart review of the electronical medical records (EMR). Patients had to be at least 18 years old and registered patients at our primary health care clinic to be enrolled in this study. Data was gathered for the 2015-2016, 2016-2017 and 2017-2018 influenza seasons. The months of October to May were designated as the Influenza season as these months have been identified as the time frame that the influenza virus has the most activity.

Results: 109 of 499  the randomly selected participants were not included in the final analysis due to reasons like: no visit to the primary health care clinic during specified periods, ability to communicate in English, insufficient data in to the EMR. Data from 390 patients were analyzed. 43.3% spoke Spanish, 36.2% were Portuguese speaking and 20.5% spoke other languages. A large majority of patients across all language groups did not receive the influenza vaccine each season.Table 1

Conclusion: Results from this study indicate that there was an alarmingly low rate of influenza vaccination among patients with LEP in our primary care clinic in during the 2015-2016, 2016-2017 and 2017-2018 influenza seasons. This highlights the need for implementing interventions aimed at both understanding why this vaccination gap exist and improving the vaccine acceptance rate amongst this venerable population.