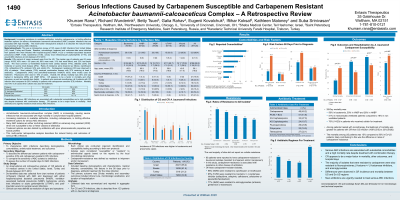 Background: Increasing resistance to available antibiotics, including carbapenems, is limiting effective treatment options for serious Acinetobacter baumannii-calcoaceticus (ABC) complex infections that are associated with high mortality.  This multi-center retrospective analysis is to describe the natural history and outcomes of serious ABC infections.

Results: Fifty percent of cases reviewed were from the US. The median age of patients was 63 years (range 18-93), 46% were > 65 years old, 69% were male, 31% had renal failure, and 22% had septic shock.  The most common co-morbidities observed were cardiac disease (41%), diabetes (32%) and moderate or severe renal disease (26%).  Rates of resistance were observed as follows: ciprofloxacin 74%, ceftazidime 67%, amikacin 52% and colistin 0%.  Carbapenem resistance (CR) was observed in 49% of patients.  Most patients (73%) received combination therapy with 37% receiving at least 4 antibiotics.  Carbapenems (40%) and penicillin/b-lactamase inhibitors (42%) were mostly used for treatment.  Polymyxins were used in 18% of cases.  Overall, the 28-day mortality was 34% and was highest in bacteremia (56%) and VABP (50%).  CR appears to be a factor in mortality and other outcomes, as well as hospital days (table).  In patients who received monotherapy, all 5 patients with CR infection died compared to 29% mortality in patients with carbapenem sensitive (CS) infection.  Mortality was 70% in 20 cases when colistin was used for treatment.