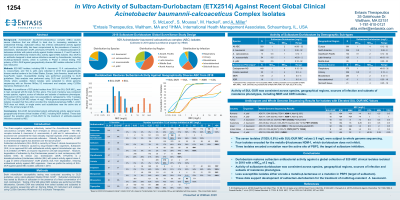 Background: Acinetobacter baumannii-calcoaceticus complex (ABC) causes severe infections that are difficult to treat due to increasing resistance to antibacterial therapy. Sulbactam (SUL) has intrinsic antibacterial activity against ABC, but its clinical utility has been compromised by the prevalence of serine β-lactamases. Durlobactam (DUR, previously ETX2514) is a diazabicyclooctenone β-lactamase inhibitor with potent activity against Ambler classes A, C and D serine β-lactamases that effectively restores SUL activity against ABC isolates. SUL-DUR is an antibiotic designed to treat serious infections caused by Acinetobacter, including multidrug-resistant strains, which is currently in Phase 3 clinical testing. The potency of SUL-DUR against geographically diverse ABC isolates collected in 2018 was measured.

Methods: 929 ABC isolates, including 698 A. baumannii, 13 A. calcoaceticus, 54 A. nosocomialis, and 164 A. pittii, were collected in 2018 from geographically diverse medical centers in the United States, Europe, Latin America, Israel and the Asia-Pacific region. Susceptibility testing was performed according to CLSI guidelines. Data analysis was performed using CLSI and EUCAST breakpoint criteria where available. Select isolates were subjected to whole genome sequencing with an Illumina MiSeq V2 instrument and analysis using CLCBio Genomics Workbench v6.5.

Results: In surveillance of 929 global isolates from 2018, the SUL-DUR MIC90 was 2 mg/L compared with 64 mg/L for SUL alone. This level of potency was consistent across species, regions, source of infection and subsets of resistance phenotypes. Fifty percent of the isolates were non-susceptible to carbapenems. Only 7 isolates (0.75%) had SUL-DUR MIC values >4 mg/L. Whole genome sequencing of these 7 isolates revealed that they either encoded the metallo-β-lactamase NDM-1, which DUR does not inhibit, or single amino acid substitutions near the active site of PBP3, the primary target of SUL.