LB-1 - Efficacy and Safety of Oral Sulopenem Etzadroxil/Probenecid Versus Oral Ciprofloxacin in the Treatment of Uncomplicated Urinary Tract Infections (uUTI) in Adult Women: Results from the SURE-1 Trial

Oral Abstract
Location: On Demand
Background: Sulopenem is a broad-spectrum IV and oral penem antibiotic being developed for the treatment of infections caused by multidrug-resistant bacteria.Overall and Clinical Success in Patients with an Uncomplicated UTI at Test of Cure (TOC) and End of Treatment (EOT) 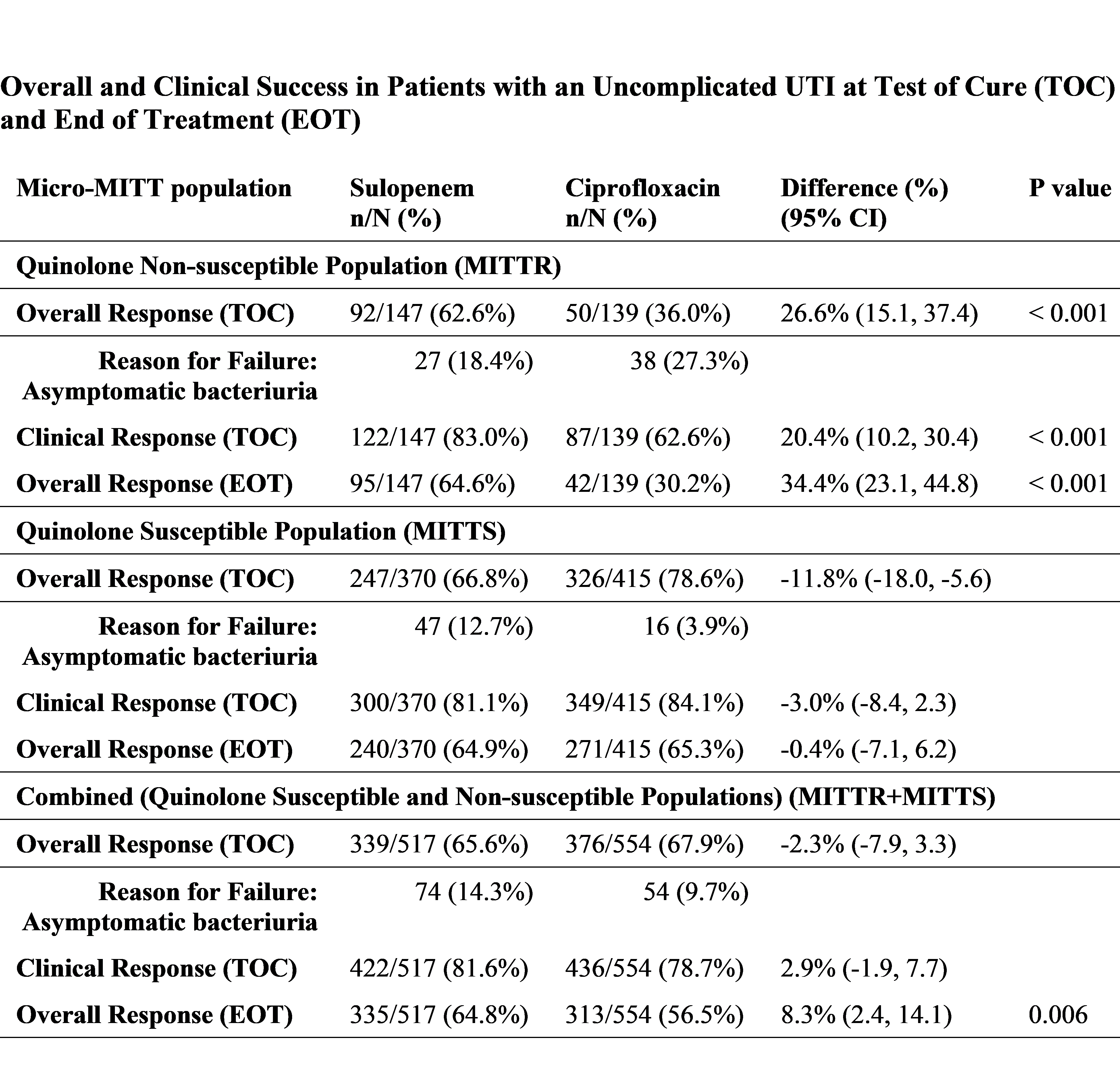 Methods: 1,671 adult women with pyuria, bacteriuria, and signs and symptoms of uUTI were randomized to sulopenem etzadroxil/probenecid bid for 5 days or ciprofloxacin bid for 3 days. Two independent primary analyses, each with a separate alpha assigned, were incorporated into the design of the study with the primary endpoint being overall success (combined clinical and microbiologic success) at the Test of Cure (TOC) visit. In the micro-MITTR population (patients with baseline pathogen resistant to ciprofloxacin), sulopenem was compared for superiority over ciprofloxacin; in the micro-MITTS population (patients with baseline pathogen susceptible to ciprofloxacin), the two agents were compared for non-inferiority. Using a pre-specified hierarchical testing procedure (Westfall 2001), the primary efficacy endpoint was then to be further tested if either superiority or non-inferiority was declared in the MITTR or MITTS populations, respectively.

Treatment emergent adverse events occurred more frequently in sulopenem patients (all, 24.8% vs 13.9%; related, 17.0% vs 6.2%), accounted for by a higher incidence of self-limited diarrhea (12.4% vs 2.5%). Serious adverse events were similar on each regimen.

Conclusion: Sulopenem was superior to ciprofloxacin for the treatment of adult women with uUTI due to quinolone non-susceptible pathogens. Sulopenem was not non-inferior in the treatment of quinolone susceptible pathogens, driven by a lower rate of asymptomatic bacteriuria in patients receiving ciprofloxacin, but was non-inferior in the combined population of patients.