1276 - Evaluation of CD377, a Novel Antiviral Fc-Conjugate (AVC), In Vitro Activity and In Vivo Efficacy in Immune-Competent and -Deficient (SCID) Lethal Mouse Models 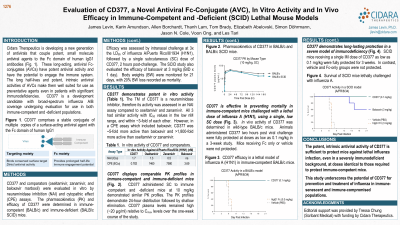 Background: Cidara’s AVCs are novel, potent, antiviral agents conjugated with the Fc domain of human IgG1. CD377 is an AVC development candidate being evaluated for prevention and treatment of seasonal and pandemic influenza, including in immune-deficient populations unable to benefit from vaccination. We evaluated CD377 in vitro and in SCID mice to determine the impact of compromised immune status on efficacy.

Conclusion: CD377 exhibited potent in vitro activity and had similar PK in IC and ID mice.  In efficacy studies, CD377 demonstrated robust potency in both IC and ID mouse models at equivalent doses (0.1 mg/kg, SC, single dose).  These results support further development of CD377 as a novel antiviral for the prevention and treatment of influenza infection, including in people with immune deficiencies and higher risk of infection.Balb/c and Balb/c SCID