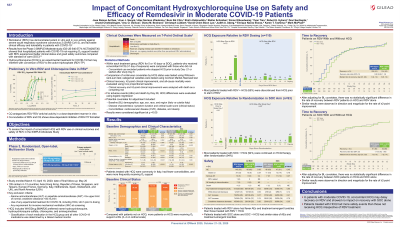 Background: Remdesivir (RDV) has been shown to shorten recovery time and was well tolerated in patients with severe COVID-19. Hydroxychloroquine (HQN) is an experimental treatment for COVID-19. Effects of coadministration of HQN with RDV have not been studied and are relevant given the long half-life (~22 days) of HQN. We report the impact of concomitant HQN and RDV use on clinical outcomes and safety in patients with moderate COVID-19.

Conclusion: In moderate COVID-19 patients, concomitant HQN may delay recovery on RDV and showed no impact on recovery with SoC alone. The AE profile of HQNpos patients was worse than that observed for HQNneg patients, regardless of RDV treatment.