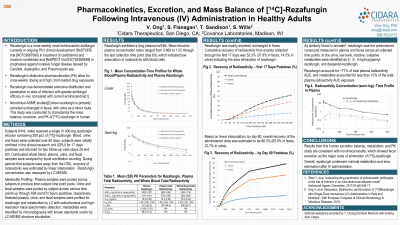 Background: Rezafungin is a once-weekly novel echinocandin antifungal currently in Phase 3 development for treatment of candidemia and invasive candidiasis (ReSTORE) and for prevention of invasive fungal disease caused by Candida, Aspergillus, and Pneumocystis in blood and marrow transplant recipients (ReSPECT).  Nonclinical ADME studies in rats and monkeys show rezafungin is primarily excreted unchanged in feces, with urine as a minor route. This study was conducted to characterize the routes of elimination of [14C]-rezafungin and the pharmacokinetics of total radioactivity and plasma rezafungin in humans.

Methods: Nine healthy male subjects received a single IV 400-mg rezafungin infusion containing 200 µCi of [14C]-rezafungin. Serial blood samples, urine, and feces were collected at specified times over 60 days; subjects were initially confined in the clinical research unit (CRU) for 17 days postdose and returned for two follow-up visits (days 29 and 60). During the period of time subjects were away from the CRU, recovery of radioactivity was estimated by linear interpolation.

Results: Rezafungin exhibited a long plasma half-life and was mainly excreted in feces unchanged.  Cumulative recovery of radioactivity from excreta collected through the first 17 days was 52% (38% in feces, 14% in urine), reinforcing the slow overall elimination of rezafungin. Overall recovery of the administered dose by day 60 was estimated to be 88.3% (65.6% in feces, 22.7% in urine) (Figure 1). Mean blood/plasma concentration ratios ranged from 0.860 to 1.02 through the last collection time point (day 60), which indicated low association of radioactivity with blood cells. Rezafungin was the predominant compound measured in plasma and feces across all collected time points. In the urine, as observed in rat and monkey metabolite profiling studies, low level, inactive, oxidative metabolites were identified as 2-, 3-, 4-hydroxylpentyl rezafungin, and despentyl-rezafunginFigure 1 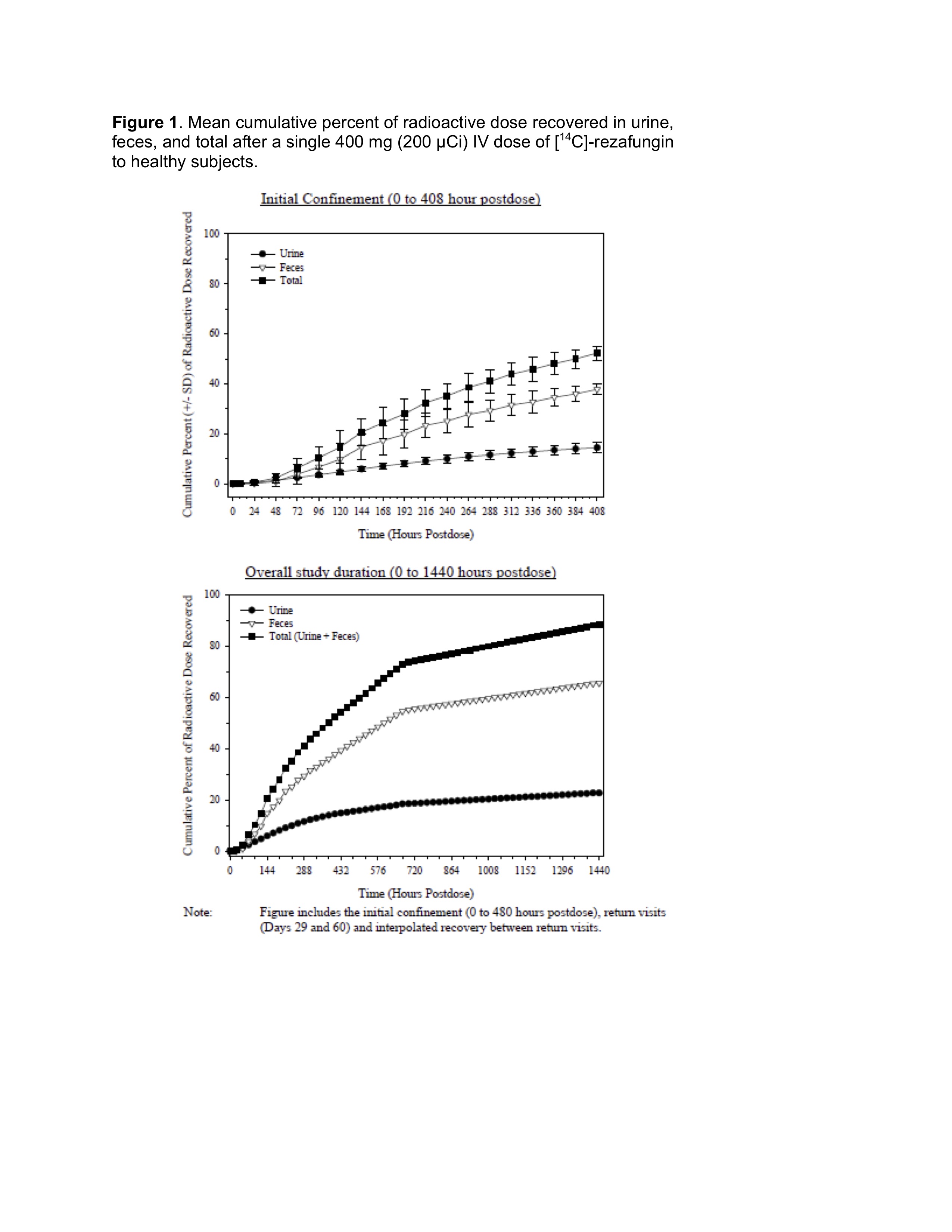 Conclusion: Results from this human excretion balance, metabolism and PK study are consistent with nonclinical results, which showed fecal excretion as the major route of elimination of rezafungin. Rezafungin was the predominant compound in plasma and feces.