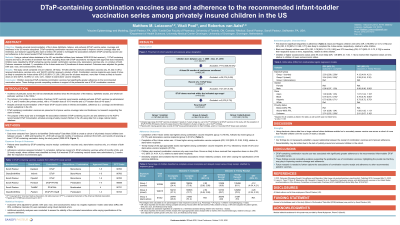 Background: Despite universal recommendation of the 3+1 diphtheria, tetanus, and pertussis (DTaP) vaccine series in infants and toddlers, adherence (i.e. coverage and timeliness) remain suboptimal in the US. DTaP-containing combination vaccines are presumed to improve vaccine coverage rates and timeliness, but research on this topic is limited. The purpose of this study was to compare adherence to the recommended infant-toddler vaccination series between recipients of DTaP-containing combination vaccines (i.e. quadrivalent/pentavalent) and stand-alone vaccines (i.e. trivalent).

Methods: We used the Optum de-identified Clinformatics Data Mart database to create a cohort of children born between 2009 and 2016 with > 24 months of continuous enrollment from birth, and records of > 1 DTaP vaccine receipt. Patients were classified by DTaP-containing vaccine receipt: combination vaccines only, stand-alone vaccines only, or a mixture of both. The primary adherence outcome was completion of the 4-dose series within 20 months of life. We adjusted outcomes for gender, birth year, race, and socioeconomic status via a logistic regression model.