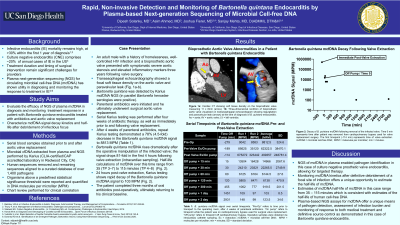 Background: There are up to 50,000 new cases of infective endocarditis each year in the United States, of which approximately 20% are culture negative endocarditis (CNE). In-hospital mortality remains high at 20 to 30%. Despite advances in diagnostic testing, determining the timing of surgery and duration of treatment in CNE are significant challenges for clinicians. Plasma next-generation sequencing (NGS) for circulating microbial cell-free DNA (mcfDNA) has shown utility in diagnosing and monitoring the response to treatment in endocarditis.

Methods: Serial blood samples were obtained prior to and after aortic valve replacement in a patient with culture negative endocarditis. Microbial cfDNA was extracted from plasma and NGS was performed by Karius, Inc. (Redwood City, California). Human sequences were removed and remaining sequences were aligned to a curated database of over 1,400 pathogens. Organisms present above a predefined statistical significance threshold were reported and quantified in DNA molecules per microliter (MPM). Chart review was performed for clinical correlation.