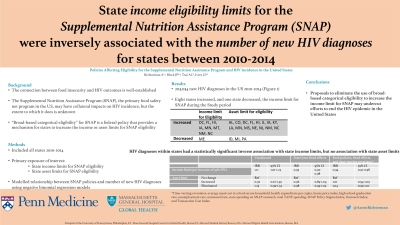 Background: The connection between food insecurity and HIV outcomes is well-established. The Supplementary Nutrition Assistance Program (SNAP), the primary program in the United States that addresses food insecurity, may have collateral impacts on HIV incidence, but the extent to which it does is unknown. “Broad-based categorical eligibility” for SNAP is a federal policy that provides a mechanism for states to increase the income or asset limits for SNAP eligibility. The Department of Agriculture under the Trump Administration has proposed eliminating this policy.

Methods: We estimated the association between the number of new HIV diagnoses from 2010 to 2014 for each state and (1) state income limits for SNAP eligibility as a percentage of the federal poverty level and (2) state asset limits for SNAP eligibility (increased/eliminated vs. unchanged). We fitted multivariable negative binomial regression models with annual incidence of HIV diagnoses specified as the outcome; SNAP policies as the primary explanatory variable of interest; state and year fixed effects; and time-varying covariates related to the costs of food, health care, housing, employment, SNAP outreach, and total spending on Temporary Assistance for Needy Families (TANF) programs. Conclusion: State income limits for SNAP eligibility were inversely associated with the number of new HIV diagnoses for states between 2010-2014. Proposals to eliminate the use of broad-based categorical eligibility to increase the income limit for SNAP may undercut efforts to end the HIV epidemic in the United States.