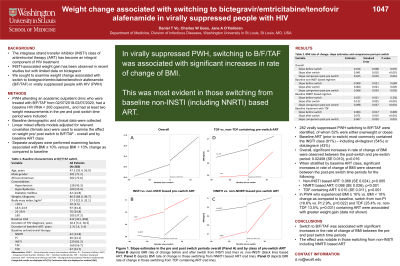 Background: Integrase strand transfer inhibitor (INSTI) associated weight gain has been observed in a number of recent studies but with limited data on bictegravir. Here we examine weight change associated with the switch to co-formulated bictegravir/emtricitabine/tenofovir alafenamide (B/F/TAF).

Methods: We performed a retrospective analysis of consecutive PWH attending an academic outpatient clinic who received a prescription for B/F/TAF from 02/07/2018-02/07/2019 and had a baseline HIV RNA < 200 copies/mL prior to starting B/F/TAF. Baseline demographics and clinical parameters were obtained from chart review. Parameters of interest were collected for one year (at a minimum) before and one year after starting B/F/TAF. Linear mixed model analyses were conducted for PWH before/ after switch. Separate analyses were performed examining factors associated with ≥ 10% BMI increase versus < 10% increase.

Conclusion: Overall, there were no significant changes in BMI between pre and post switch to B/F/TAF time periods; however the majority of PWH switched from an INSTI-based regimen. Analysis of PWH who experienced ≥ 10% increase compared to < 10% BMI increase, indicated that factors including younger age, switch from a non-PI containing regimen and switch from TDF were associated with greater weight gain.