Background: CD377 is a novel antiviral Fc-conjugate (AVC) development candidate for influenza prevention and treatment, comprising multiple copies of a novel potent small-molecule antiviral and the Fc domain of human IgG1. CD377 was designed as a stable, long-acting molecule for treatment and prevention of influenza A and B.  Studies were conducted to characterize CD377 stability/pharmacokinetics (PK), single-dose efficacy in influenza models, and safety/toxicology.

Results: Plasma concentrations measured by Fc-capture/Fc-detection and NA-capture/Fc-detection were comparable, indicating that CD377 remained intact in vivo. In species tested, CD377 t1/2 was 3–10 days. Dose proportional increases in exposure were observed, notably from 1–100 mg/kg in mouse.  High bioavailability (77%) was observed after subcutaneous (SC) or intramuscular (IM) administration.  A single SC dose of 1 mg/kg administered 28 days prior to infection provided 100% protection against H1N1, B, and H3N2 subtypes in mouse (Fig. 1).  Treatment efficacy was observed with a single 0.3 mg/kg IM dose.  The 2-week monkey toxicology study showed no adverse effects. Figure 1. Efficacy (Survival and Body Weight) of CD377 in a 28-Day Prevention Model Against Influenza H1N1, H3N2, and B Subtypes in Mouse (IN infection challenge on Day t=0 and CD377 dosed t–28 days). 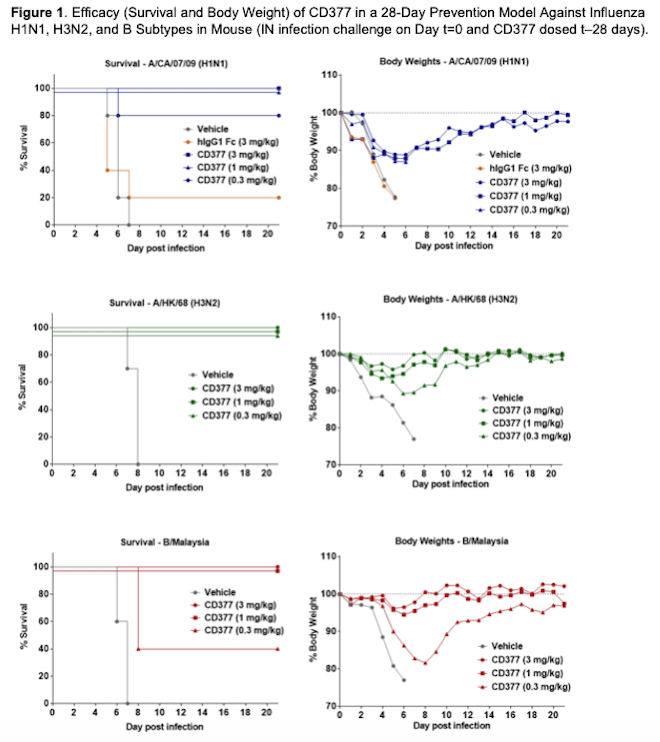 Conclusion: The stability and safety of CD377, together with its long half-life and efficacy with a single dose, support the potential of CD377 as a long-acting, novel AVC for the prevention and treatment of influenza.