(W1330-01-03) More Than the Sum of Its Parts: In Silico Immunogenicity Risk Assessment for Fusion Proteins and Novel Antibody Modalities

Purpose: The potential for immunogenicity and anti-drug antibody (ADA) generation is a hurdle that drug developers face in the process of bringing biologics innovations to the clinic. At the same time, new biologics formats have enabled developers to engineer products with improved function and specificity. The creation of an integrated in silico screening and re-engineering platform called ISPRI has made it possible to rapidly assess the overall immunogenic potential of a biologic and to identify individual T cell epitope clusters that may contribute to immunogenicity in the clinical setting. Here we present several examples of the ISPRI-driven assessment of novel format biologics such as fusion proteins, bispecific antibodies and antibody-drug conjugates.

Methods: We retrieved the amino acid sequences of Enbrel, a fusion protein consisting of TNF-receptor and the Fc domain of human IgG1, Hemlibra, a bispecific antibody targeting blood factors X and IXa, and Lumoxiti, an antibody drug conjugate consisting of a single chain variable fragment (scFv) targeting CD22 fused to a modified PE38 exotoxin. Each of these products has a different format and function. Setting aside the clinical functions of these molecules, we used ISPRI to assess their immunogenicity. Using models for a globally representative set of HLA-DR supertype alleles, putative T cell epitopes were mapped for each complete protein sequence and constituent domain using the EpiMatrix algorithm, and each predicated HLA ligand was screened against an internally curated database of human antibody isolates and germline sequences. In addition to evaluating for potential T effector epitopes, the ISPRI platform also considers the contribution of regulatory T cell epitopes (Tregitopes) to immunogenic potential. For each input sequence and domain, ISPRI provided Tregitope-adjusted Immunogenicity Scores, which are normally distributed around zero. ISPRI normalizes this score so as to determine how the T cell epitope content of the sequence compares to the T cell epitope content of a random protein of equivalent length. Positive scores indicate greater than expected content, while negative scores indicate less-than-random epitope content. The Tregitope-adjusted Immunogenicity Score can be used to predict the ADA response rate for novel antibody products using a regression model based on a set of clinical benchmark monoclonal antibodies whose observed ADA response rates are known. The JanusMatrix algorithm contained in the ISPRI toolkit was also used to evaluate the conservation of identified T cell epitope clusters (hot spots) with autologous (human) proteins at both the HLA-binding and TCR-interacting face of each epitope. The relative risk of immunogenicity was estimated using the Immunogenicity Scale and calculated using the ISPRI ADA prediction tool. This comprehensive assessment was performed, using ISPRI, for each of the input protein domains and the complete multidomain proteins.

Results: Consistent with observations of low immunogenicity rates, the ISPRI-generated immunogenicity score of the complete Enbrel fusion protein was low (-56.97), as were the scores of each domain. Similarly, the immunogenicity scores of the Hemlibra domains were low individually (between -33.66 and -52.24), and when combined for use in ISPRI’s regression model to predict ADA, resulted in an estimate of minimal ADA response, corroborating the observation of low ADA rates in the clinic. On the other hand, immunogenicity scores for the Lumoxiti domains were comparatively high (between -19.37 and 37.75), and applying ISPRI’s ADA model to the isolated components of the scFv resulted in an estimate of ADA response in ~32% of exposed patients. This prediction is consistent with the observation of high ADA positivity (59%) for Lumoxiti in clinical trials. Higher immunogenicity than predicted based on the antibody component alone may be attributed to additional fully foreign T cell epitope content in the PE38 domain and the lack of a human constant domain, which generally contains tolerance-bolstering Tregitopes.

Conclusion: In this study, three out of three multi-domain molecules that were evaluated were shown to have overall immunogenicity risk assessments performed by ISPRI that were consistent with clinical observations.  ISPRI enables rapid in silico analysis and assessment of the immunogenicity risk of complex, multidomain biologics, and also estimates the ADA rates for antibody proteins. As biologic formats become more complex, it is necessary to consider the immunogenic potential of novel constructs as a whole, and of individual components that might each have distinct T cell epitope characteristics. 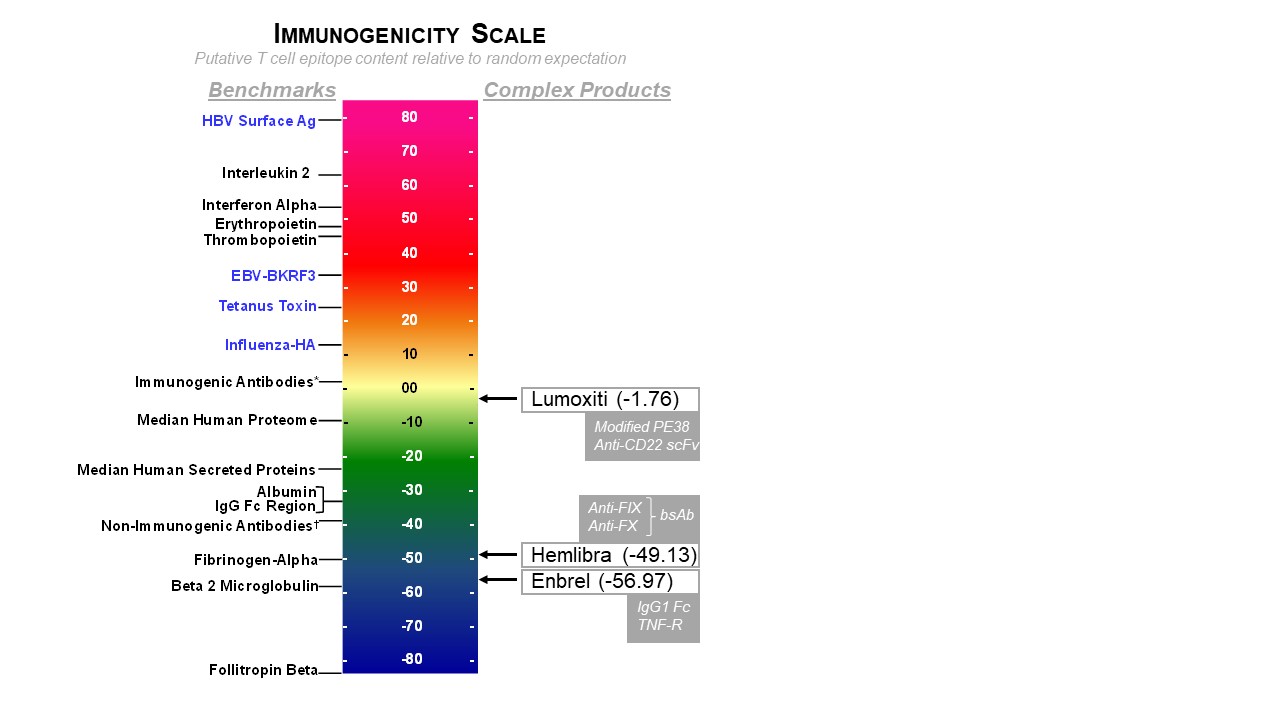