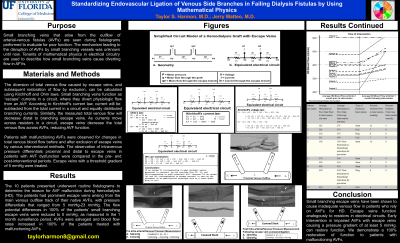 T. S. Harmon, J. Matteo
Purpose: Small branching veins that arise from the outflow of arterial-venous fistulas (AVFs) are seen during fistulograms performed to evaluate for poor function. The mechanism leading to the disruption of AVFs by small branching vessels was unknown until now. Tenants of mathematical physics in electrical circuitry are used to describe how small branching veins cause diverting flow in AFVs.

Patients with malfunctioning AVFs were observed for changes in total venous blood flow before and after exclusion of escape veins by various interventional methods. The observation of intravenous pressure differentials proximal and distal to escape veins in patients with AVF disfunction were compared in the pre- and post-interventional periods. Escape veins with a threshold gradient of 5 mmHg were treated.

Results: The 10 patients presented underwent routine fistulograms to determine the reason for AVF malfunction during hemodialysis (HD). The patients had prominent escape veins arising from the main venous outflow track of their native AVFs, with pressure differentials that ranged from 5 mmHg-23 mmHg. The flow potential differences in 100% of the patients’ small branching escape veins were reduced to 0 mmHg, as measured in the 1 month surveillance period. AVFs were salvaged and blood flow rates increased in 100% of the patients treated with malfunctioning AVFs.

Conclusions: Small branching escape veins have been shown to cause inadequate venous flow in patients who rely on AVFs for HD. Escape veins function analogously to resistors in electrical circuits. Early intervention in impaired AVFs with escape veins causing a pressure gradient of at least 5 mmHg, can restore function. We demonstrate a 100% restoration of function to patients with malfunctioning AVFs.