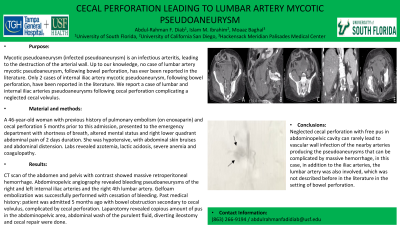 Material and Methods: A 46-year-old woman with previous history of pulmonary embolism (on enoxaparin) and cecal perforation 5 months prior to this admission, presented to the emergency department with shortness of breath, altered mental status and right lower quadrant abdominal pain of 2 days duration. She was hypotensive, with abdominal skin bruises and abdominal distension. Labs revealed azotemia, lactic acidosis, severe anemia and coagulopathy.

Conclusions: Neglected cecal perforation with free pus in abdominopelvic cavity can rarely lead to vascular wall infection of the nearby arteries producing the pseudoaneurysms that can be complicated by massive hemorrhage, in this case, in addition to the iliac arteries, the lumbar artery was also involved, which was not described before in the literature in the setting of bowel perforation.