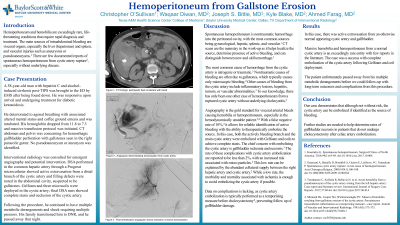 C. O’Sullivan, W. Diwan, J. Bittle, K. Blake, A. Farag
Purpose: Hemoperitoneum and hemobilia are exceedingly rare, life-threatening conditions that require rapid diagnosis and treatment. The main sources of intraabdominal bleeding are visceral organs, especially the liver and spleen, and vascular injuries such as aneurysms or pseudoaneurysms. The inciting trigger for rupture is typically anticoagulation, pregnancy, or trauma. There are few documented reports of spontaneous hemoperitoneum from cystic artery rupture, especially without underlying disease. We present a case of cystic artery bleeding likely due to gallstone erosion in a patient without cholecystitis.

Material and Methods: A 58-year-old man with hepatitis C and alcohol-induced cirrhosis post TIPS placement was brought to the emergency department by EMS after being found down. While being evaluated for diabetic ketoacidosis, he deteriorated requiring intubation and blood tranfusions. A computed tomography abdomen and pelvis was concerning for hemorrhagic gallbladder perforation with gallstones seen in the right paracolic gutter. No pseudoaneurysm or aneurysm was identified. Interventional radiology was consulted for emergent angiography and potential intervention.

Results: Digital subtraction angiography (DSA) was performed in the common hepatic artery utilizing a Progreat microcatheter. This revealed active extravasation from a distal branch of the cystic artery with filling defects noted in the abdominal cavity, suspected to be gallstones. No hypervascular tumor/hepatoma was seen. The distal branch was selected and embolized using Gelfoam followed by two Nester coils. DSA revealed continued extravasation, and a third Nester coil was deployed followed by additional Gelfoam. Final DSA showed complete stasis of the cystic artery. Following the procedure, he continued to have metabolic derangements and shock requiring pressors. His family transitioned him to DNR and he passed away that night.

Conclusions: Spontaneous hemoperitoneum is nontraumatic hemorrhage into the peritoneal cavity, with the most common sources being gynecological, hepatic, splenic, and vascular. Massive hemobilia and hemoperitoneum from a normal cystic artery is a rare entity with few reports in the literature. Our case demonstrates that although not without risk, the cystic artery can be embolized if identified as the source of bleeding. Further studies are needed to help determine rates of gallbladder necrosis in patients that do not undergo cholecystectomy after celiac artery embolization.