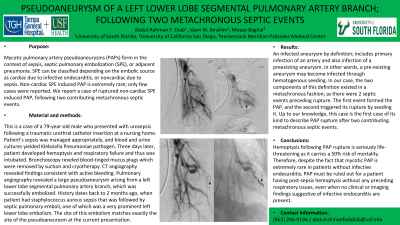 Material and Methods: This is a case of a 79-year-old male who presented with urosepsis following a traumatic urethral catheter insertion at a nursing home. Patient's sepsis was managed appropriately, and blood and urine cultures yielded Klebsiella Pneumoniae pathogen. Three days later, patient developed hemoptysis and respiratory failure and thus was intubated. Bronchoscopy reveled blood-tinged mucus plugs which were removed by suction and cryotherapy. CT angiography revealed findings consistent with active bleeding. Pulmonary angiography revealed a large pseudoaneurysm arising from a left lower lobe segmental pulmonary artery branch, which was successfully embolized. History dates back to 2 months ago, when patient had staphylococcus aureus sepsis that was followed by septic pulmonary emboli, one of which was a very prominent left lower lobe embolism. The site of this embolism matches exactly the site of the pseudoaneurysm at the current presentation.

Results: An infected aneurysm by definition; includes primary infection of an artery and also infection of a preexisting aneurysm. In other words, a pre-existing aneurysm may become infected through hematogenous seeding. In our case, the two components of this definition existed in a metachronous fashion; as there were 2 septic events preceding rupture. The first event formed the PAP, and the second triggered its rupture by seeding it. Up to our knowledge, this case is the first case of its kind to describe PAP rupture after two contributing metachronous septic events.

Conclusions: Hemoptysis following PAP rupture is seriously life-threatening as it carries a 50% risk of mortality. Therefore, despite the fact that mycotic PAP is extremely rare in patients without infective endocarditis, PAP must be ruled out for a patient having post-sepsis hemoptysis without any preceding respiratory issues, even when no clinical or imaging findings suggestive of infective endocarditis are present.