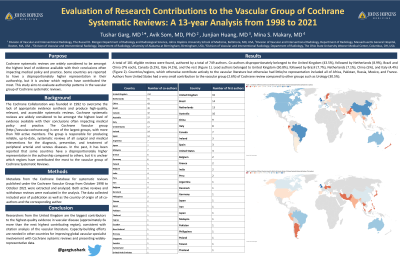 T. Garg, A. Som, J. Huang, M. S. Makary
Purpose: Cochrane systematic reviews are widely considered to be amongst the highest level of evidence available with their conclusions often impacting medical policy and practice. Some countries are reported to have a disproportionately higher representation in their authorship, but it is unclear which regions have contributed the most. This study aims to evaluate authorship patterns in the vascular group of Cochrane systematic reviews.

Material and Methods: Metadata from the Cochrane Database for systematic reviews published under the Cochrane Vascular Group from October 1998 to October 2021 were extracted and analyzed. Both active reviews and withdrawn reviews were evaluated in the analysis. The data collected included year of publication as well as the country of origin of all co-authors and the corresponding author.

Results: A total of 181 eligible reviews were found, authored by a total of 749 authors. Co-authors disproportionately belonged to the United Kingdom (43.5%), followed by Netherlands (8.9%), Brazil and China (7% each), Canada (5.2%), Italy (4.1%), and the rest (Figure 1). Lead authors belonged to United Kingdom (50.8%), followed by Brazil (7.7%), Netherlands (7.1%), China (5%), and Italy (4.4%). Countries/regions, which otherwise contribute actively to the vascular literature but otherwise had little/no representation included all of Africa, Pakistan, Russia, Mexico, and France. Authors from United States had a very small contribution to the vascular group (2.6%) of Cochrane review compared to other groups such as Urology (30.5%).

Conclusions: Researchers from the United Kingdom are the biggest contributors to the highest-quality evidence in vascular disease (approximately 6x more than the next highest contributing region), consistent with citation analysis of the vascular literature. Capacity-building efforts are needed in other countries for improving global vascular specialist involvement with Cochrane systemic reviews and presenting widely-representative data.