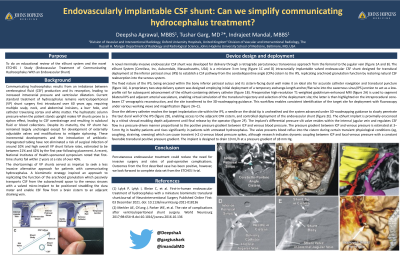 D. Agrawal, T. Garg, I. Mandal
Purpose: To do an educational review of the eShunt system and the novel ETCHES I Study (Endovascular Treatment of Communicating Hydrocephalus With an Endovascular Shunt)

Material and Methods: The first in-human trial on endovascular treatment of communicating hydrocephalus is underway. The ETCHES I is a single center prospective pilot study. The first successful percutaneous implantation of the eSHUNT system using a catheter-based endovascular approach was recently described (1). We review the approach, benefits and future outlook of this novel system.

Results: Why do we need a shift from conventional VP shunt systems?

Ventriculoperitoneal shunt (VPS) surgery is presently the most common approach for the treatment of communicating hydrocephalus. However, post-operative complications are not uncommon with a high rate of CNS infection and/or VPS revision- 21.3 complications per 100 patients per year in the first year after VPS surgery (2). This summons an innovation in the currently accepted approach for treatment of communicating hydrocpehalus.

The ETCHES I study has been designed to study the outcomes and potential reduction in complications from VPS surgery. The eSHUNT system being used is percutaneously deployed in the cerebellopontine angle cistern under fluoroscopy guidance and works by mimicking the function of arachnoid granulations in allowing the drainage of CSF from arachnoid space to the venous system.

Results from the first in-human experience have been recently published and demonstrate reduction in intracranial pressure (ICP) levels following the endovascular treatment. This positive outcome could signal a revolution in the treatment of communicating hydrocephalus.

Conclusions: Percutaneous endovascular treatment could reduce the need for invasive surgery and rates of post-operative complications. Outcomes from the first described case has been positive, however, we look forward to complete data set from the ETCHES I trial.