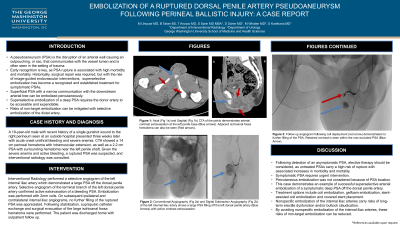 M. Uhouse, B. Taber, S, Kantharia, T. Arusoo, M. Whalen, S. Sarin, D. Scher
Purpose: Pseudoaneurysm (PSA) involves disruption of an arterial wall causing an outpouching or sac that communicates with the vessel lumen and is often seen in the setting of trauma. Early recognition is key as PSA rupture is associated with high morbidity and mortality. Historically, surgical repair was required, but with the rise of image-guided endovascular interventions, angioembolization has become a recognized and established treatment for symptomatic PSAs, particularly when the donor artery is accessible and expendable. Risks of non-target embolization can be mitigated with selective embolization of the distal artery.

Material and Methods: A 19-year-old male with recent history of a single gunshot wound to the right perineum seen at an outside hospital presented three weeks later with acute onset urethral bleeding and severe anemia. CTA showed a 14 cm perineal hematoma with intramuscular extension, as well as a 2.2 cm PSA with surrounding hematoma near the left penile shaft. Given the severe anemia and active bleeding, he was taken to interventional radiology for angiogram and selective angioembolization of a suspected ruptured PSA.

Results: Interventional Radiology performed a selective angiogram of the left internal iliac artery which demonstrated a large PSA of the dorsal penile artery. Selective angiogram of the terminal branch of the left dorsal penile artery confirmed active extravasation of a bleeding PSA. Coil embolization was performed with 2mm coils without further filling of the PSA on subsequent ipsi- and contralateral internal iliac angiograms. Following stabilization, cystoscopy, suprapubic catheter exchange, and surgical evacuation of the large ischioanal fossa hematoma were performed. The patient was discharged home with outpatient follow up.

Conclusions: If an asymptomatic PSA is detected, elective therapy is beneficial as untreated PSAs carry a high risk of rupture with associated increases in morbidity and mortality. This case demonstrates an example of successful selective angioembolization of a symptomatic PSA off the dorsal penile artery. By avoiding nonspecific embolization of the internal iliac arteries, the risks of long-term erectile dysfunction or buttock claudication are reduced.