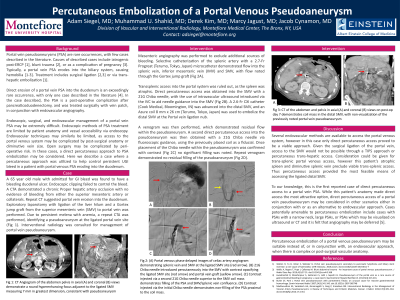 Material and Methods: A 65 year old male admitted for GI bleed was found to have a bleeding duodenal ulcer. Endoscopic clipping failed to control the bleed. An angiogram demonstrated a chronic common hepatic artery occlusion and no evidence of bleeding from the superior mesenteric artery or collaterals. Repeat CT suggested a duodenal ulcer with erosion into the PV. Exploratory laparotomy with ligation of the PV at the liver hilum and a Gortex conduit from the superior mesenteric vein (SMV) to an intra hepatic PV was performed. Due to persistent melena with anemia, a repeat CTA was performed. A PSA at the junction of the splenic vein (SV) and SMV, the site of the ligated PV, was identified. Interventional radiology was consulted for management of this PV PSA.

Results: Selective catheterization of the splenic artery with delayed imaging to visualize the portal venous system was performed. The SV, inferior mesenteric vein (IMV) and SMV, with flow noted through the Gortex conduit were identified. The PSA was noted at the confluence of the SV and the SMV. Transsplenic access into the portal system was ruled out, as the spleen was atrophic. After a review of the CT it was decided to attempt direct percutaneous access of the PSA. Under fluoroscopy a 21 gauge Chiba needle entered the SMV (not the PSA). A V18 wire was advanced into the SV and a 2.6-Fr CXI catheter (Cook Medical, Bloomington, IN) was placed into the SMV. The PSA was identified and cannulated and an Azure coil 8 mm x 26 cm (Terumo, Tokyo, Japan) was used to embolize. However, the coil herniated out of the PSA and lodged at the confluence of the SV and the SMV. An attempt at a direct percutaneous puncture of the PSA using the previously placed coil as a fiducial was made. The Chiba needle entered the SV near the coil. An angio via this needle confirmed no flow to the PSA and redirected flow to the IMV and the Gortex conduit. The duodenal bleeding abated immediately post this procedure.

Conclusions: Percutaneous embolization of unusual pseudoaneurysms due to complex or post-surgical vascular anatomy, should be considered in conjunction with, or instead of an endovascular approach.