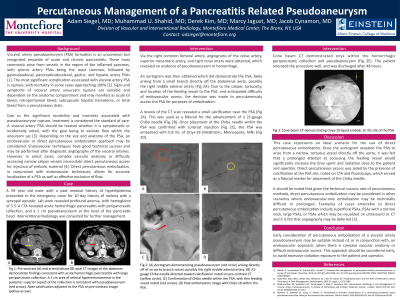 A. Siegel, M, U. Shahid, D. Kim, M. Jagust, J. Cynamon
Purpose: Pancreatitis related pseudoaneurysms occasionally arise off vessels which may be difficult to access, leading to prolonged angiography and procedural failure. In these cases, early direct percutaneous access into the pseudoaneurysm should be considered.

Material and Methods: A 59 year old male with a past medical history of hyperlipidemia presented to the emergency room for syncope and reported 10 days of melena. Lab work revealed profound anemia, with hemoglobin of 3.5. A CTA revealed acute hemorrhagic pancreatitis with peripancreatic collection, and a 1 cm pseudoaneurysm at the level of the pancreatic head. Interventional Radiology was consulted for further management.

Conclusions: Early consideration of percutaneous embolization of a visceral artery pseudoaneurysm may be suitable instead of, or in conjunction with, an endovascular approach, when there is complex vascular anatomy or difficult endovascular access. This approach should be considered early, to avoid excessive radiation exposure to the patient and operator.