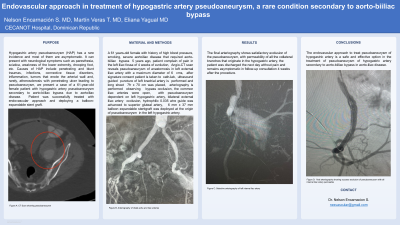 N. E. Santana Sr., M. V. Troncoso
Purpose: Hypogastric artery pseudoaneurysm (HAP) has a rare incidence and most of them are asymptomatic. It can present with neurological symptoms such as paresthesia, sciatica, weakness of the lower extremity, drooping foot, etc. Causes of HAP include penetrating and blunt traumas, infections, connective tissue disorders, inflammation, tumors that erode the arterial wall and, rarely, atherosclerosis with penetrating ulcer leading to pseudoaneurysm, we present a case of a 61-year-old female patient with hypogastric artery pseudoaneurysm secondary to aorto-biiliac bypass due to aortoiliac disease. Patient was successfully treated with endovascular approach and deploying a balloon-expandable stent graft.

Results: The final arteriography shows satisfactory exclusion of the pseudoaneurysm, with permeability of all the collateral branches that originate in the hypogastric artery, the patient was discharged the next day without pain and remains asymptomatic in follow-up 4 weeks after the procedure.

Conclusions: Endovascular approach is a safe and effective option in the treatment of pseudoaneurysm of hypogastric artery secondary to aorto-biiliac bypass in aorto-iliac disease.