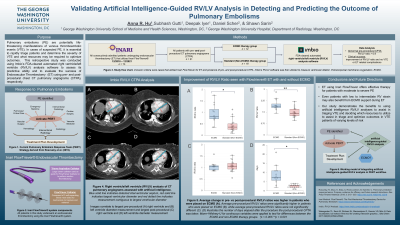 Material and Methods: We reviewed 3 years of EMR data to identify ET cases performed at our institution. Inclusion criteria were cases that utilized Inari FlowTriever for ET and presence of pre- and post-procedural CTPA. Imbio’s RV/LV software was then utilized to measure ventricular dilation. RV/LV ratios greater than 0.9 according to pre-procedural CPTA were defined as abnormal by the software. Clinical success was defined as improvement of RV/LV ratio and no VTE or ET related complications.

Conclusions: ET using Inari FlowTriever offers effective therapy for patients with moderate to severe PE. Results from this validation further suggest that even patients with low to intermediate RV strain may benefit from ECMO support during ET. Moreover, our study demonstrates the benefits to using artificial intelligence RV/LV analyses to assist in triaging VTE and deciding which resources to utilize. Such technologies should likely become a routine part of PE Response Teams (PERT) to assist in triage and optimize outcomes in intermediate to high-risk VTE patients.