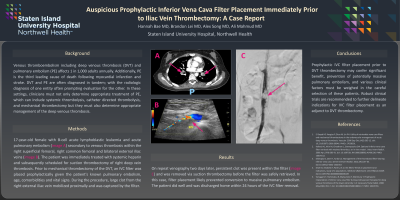 H. Bae, B. Lei, A. Mahmud, A. Song
Purpose: Venous thromboembolism including deep venous thrombosis (DVT) and pulmonary embolism (PE) affects 1 in 1,000 adults annually. DVT and PE are often diagnosed in tandem; with the radiologic diagnosis of one entity often prompting evaluation for the other. In these settings, clinicians must not only determine appropriate treatment of PE, which can include systemic thrombolysis, catheter directed thrombolysis, and mechanical thrombectomy but they must also determine appropriate management of the deep venous thrombosis. The purpose of this abstract is to review the benefits and risks of IVC filter placement as described in the current literature, discuss the major risks of deep vein mechanical thrombectomy in a patient with known pulmonary embolism, and discuss potential major clinical indications for prophylactic IVC filter placement as an adjunct to deep venous mechanical thrombectomy.

Material and Methods: We report a case of a 17-year-old female with B-cell acute lymphoblastic leukemia and acute pulmonary embolism secondary to venous thrombosis within the right superficial femoral, right common femoral and bilateral external iliac veins. The patient was immediately treated with systemic anticoagulation and subsequently scheduled for suction thrombectomy of right deep vein thrombosis. Prior to mechanical thrombectomy of the DVT, an IVC filter was placed prophylactically given the patient's known pulmonary embolism, age, comorbidities and vital signs. During the procedure, large clot from the right external iliac vein mobilized proximally and was captured by the filter.

Results: On repeat venography several days later, persistent clot was present within the filter and was removed via suction thrombectomy before the filter was safely retrieved. In this case, filter placement likely prevented conversion to massive pulmonary embolism. The patient ultimately did well clinically and was discharged home without further complication.

Conclusions: Prophylactic IVC filter placement prior to DVT thrombectomy may confer significant benefit and prevention of potentially massive pulmonary embolism. Various clinical factors must be weighed in the careful selection of these patients. Robust clinical trials are recommended to further delineate indications for IVC filter placement as an adjunct to DVT thrombectomy.