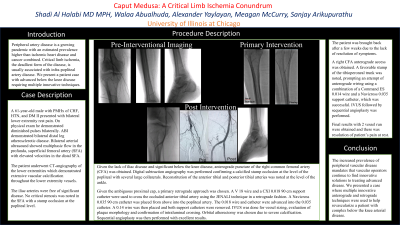 Material and Methods: Materials and

Results: Given the lack of iliac disease and significant below the knee disease, anterograde puncture of the right common femoral artery (CFA) was obtained. Digital subtraction angiography was performed confirming a calcified stump occlusion at the level of the popliteal. Reconstitution of the anterior tibial and posterior tibial arteries was noted at the level of the ankle. To avoid injury, a primary retrograde approach was chosen. Ultrasound guided dorsalis pedis access was obtained and a 4 French sheath was inserted. A V 18 wire and a CXI 0.018 90 cm support catheter were used to cross the occluded anterior tibial artery using the JENALI technique. A Navicross 0.035 90 cm catheter was placed from above in the popliteal artery. The 0.018 wire and catheter were advanced into the 0.035 catheter. A 0.14 wire was then placed (flossed) and both support catheters were removed. IVUS was done for vessel sizing, evaluation of plaque morphology and confirmation of intraluminal crossing. Orbital atherectomy was chosen due to severe calcification. Sequential angioplasty yeilded excellent results. The patient was brought back due to non resolution of symptoms. A right CFA anterograde access was obtained. A favorable stump of the tibioperoneal trunk was noted, prompting an attempt of anterograde wiring using a combination of a Command ES 0.014 wire and a Navicross 0.035 support catheter, which was successful. IVUS followed by sequential angioplasty was performed. Final results with 2 vessel run was obtained and patient has resolution of his pain at rest.