52 - Controlled Release of Doxorubicin from the GPX Embolic Device. 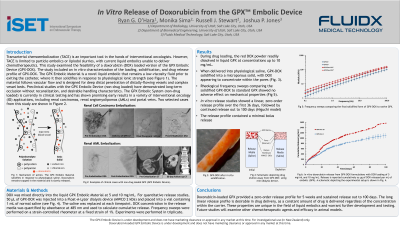 J. P. Jones, R. O’Hara
Purpose: Transarterial chemoembolization (TACE) is an important tool in interventional oncology. However, TACE is limited to particle embolics or lipiodol slurries, with current liquids unable to deliver chemotherapeutics. This study examined the feasibility of a doxorubicin (DOX) loaded version of the GPX Embolic Device (GPX-DOX). The study included an in vitro characterization of the loading, solidification, and drug release profile of GPX-DOX. The GPX Embolic Material is a novel liquid embolic that remains a low-viscosity fluid prior to exiting the catheter, where it solidifies in response to physiological ionic strength. The material follows vascular flow and is designed for deep distal penetration of distally-flowing vessels and complex vessel beds. Preclinical studies have demonstrated long-term occlusion without recanalization, and desirable handling characteristics. The GPX Embolic Device (non-drug loaded) is currently in clinical testing in a variety of peripheral vascular and IO applications.

Material and Methods: DOX was mixed directly into the liquid GPX Embolic Material at 5 and 10 mg/mL. For quantitative release studies, 50 μL of GPX-DOX was injected into a Float-A-Lyzer dialysis device (MWCO 2 kDa) and placed into a vial containing 1 mL of normal saline. The saline was replaced at each timepoint. DOX concentration in the release media was quantified by absorbance at 485 nm and used to calculate cumulative release.

Results: During drug loading, the red DOX powder readily dissolved in liquid GPX at concentrations up to 10 mg/mL. When delivered into physiological saline, GPX-DOX solidified into a microporous solid, with DOX appearing to concentrate within the pores. Rheological comparison of the solidified GPX-DOX to standard GPX showed no adverse effect on mechanical properties. In vitro release studies showed little bolus release and a linear, zero-order release profile over the first 36 days, followed by continued release out to 100 days (Higuchi model).

Conclusions: Doxorubicin-loaded GPX provided a zero-order release profile for 5 weeks and sustained release out to 100 days. The long linear release profile is desirable in drug delivery, as a constant amount of drug is delivered regardless of the concentration within the carrier. These properties are unique in the field of liquid embolics and warrant further development and testing. Future studies will examine other chemotherapeutic agents and efficacy in animal models.