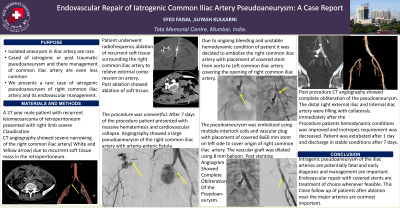 Material and Methods: A 23 male patient was a known case of unresectable retroperitoneal sarcoma encasing and compressing the bilateral common iliac arteries. The patient had grade III claudication and was referred to the Department of Interventional radiology for percutaneous ablation of retroperitoneal mass.
The patient underwent percutaneous radiofrequency ablation of retroperitoneal mass encasing the bilateral iliac arteries. The procedure was uneventful and there were no immediate post-procedure complications. After a week of the procedure patient suddenly has massive hemoptysis with severe hypotensive shock. An urgent conventional angiogram was done which showed right common iliac artery pseudoaneurysm ruptured into the adjacent bowel. It was decided to sacrifice the right common iliac artery as guidewire could not be negotiated across the aneurysm.
The aneurysm was embolized using vascular plugs and multiple interlocking coils. A covered auto uni-iliac stent-graft was placed on the left side.
Post-procedure angiogram showed complete cessation of blood flow across the aneurysm. The flow in the right lower limb was through the collaterals from the left internal iliac artery and right lumbar arteries. The patient had an uneventful recovery and was discharged in stable condition. Follow up CT scan showed a patent stent graft.

Conclusions: We presented as a very rare case of iatrogenic pseudoaneurysm of the right common iliac artery presenting as massive hemoptysis due to arterio-enteric fistula. It was successfully treated using coils and stent graft.