11 - Is There Evidence of Benefit in Edetate Disodium for Patients with Diabetes and CLTI? 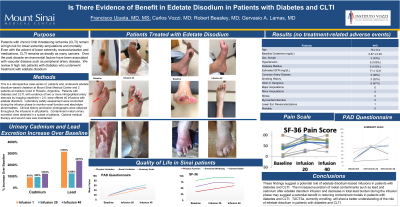 F. Ujueta, C. Vozzi, R. Beasley, G. Lamas
Purpose: Patients with CLTI remain at high risk for lower extremity amputations and mortality. Even with the advent of lower extremity endovascular revascularization and medications, CLTI remains as deadly as many cancers. Over the past decade environmental toxicants have been associated with vascular disease, including peripheral artery disease (PAD). We report on 9 high risk patients with diabetes who underwent infusions of edetate disodium.

Material and Methods: This is a retrospective case-series of 7 patients who underwent edetate disodium-based chelation at Mount Sinai Medical Center in Miami Beach and 2 patients at Instituto Vozzi in Rosario, Argentina. These patients were previously reported as part of a pilot study and individual case reports. Patients with diabetes and CLTI, with evidence of two or more infrapopliteal artery stenoses by imaging, and creatinine < 2.0, were offered 40 infusions over 8 months with an edetate disodium-based solution. Laboratory safety assessments, clinical history and lesion photographs were obtained. Contaminant urinary metal excretion was collected in a subset of patients. Optimal medical therapy and wound care was maintained.

Results: Six (out of 9) patients, mean (SD) age 76(8) years, (56% male) had a history of polyvascular disease. All patients received at least 40 infusions. Seven (78%) patients started treatment with an unhealed ulcer or gangrene with all having wound resolution. In a subset of patients (7), urinary lead excretion increased an average of 3733% and cadmium 500% after the first infusion. No patient underwent surgery for minor or major amputations during the infusion phase, with one patient undergoing lower extremity revascularization. Compared to baseline post edetate disodium urinary lead excretion decreased by 36% (p=0.0004). No serious side effects related to therapy were reported. No major cardiovascular endpoints were encountered. All patients have remained free of amputation since completing treatment.