31 - Radiologic Findings and Endovascular Management of a Rasmussen Aneurysm 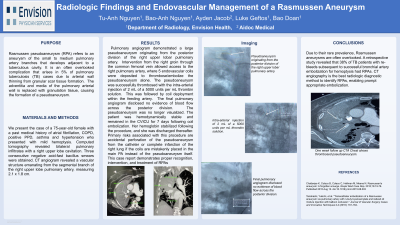 A. Jacob, L. Geftos, B. Nguyen, T.-A. Nguyen, B.-T. Doan
Purpose: Rasmussen pseudoaneurysm (RPA) refers to an aneurysm of the small to medium pulmonary artery branches that develops adjacent to a tuberculous cavity. RPAs arises in 5% of pulmonary tuberculosis (TB) cases due to arterial wall thinning from granular scar tissue formation. The adventitia and media of the pulmonary arterial wall is replaced with granulation tissue, causing the formation of a pseudoaneurysm.

Results: Pulmonary angiogram demonstrated a large pseudoaneurysm originating from the posterior division of the right upper lobar pulmonary artery. Intervention from the right groin through the common femoral vein allowed access to the right pulmonary artery, where 5 endovascular coils were deposited to embolize the pseudoaneurysm. The pseudoaneurysm was successfully thrombosed with the intra-arterial injection of 2 mL of a 5000 units per mL thrombin solution. This was followed by coil deployment within the feeding artery. The final pulmonary angiogram disclosed no evidence of blood flow across the posterior division. The pseudoaneurysm was no longer visualized. The patient was hemodynamically stable and remained in the CVICU for 7 days following coil embolization. Her hemoglobin stabilized following the procedure, and she was discharged thereafter. Primary risks associated with this procedure are accidental perforation of the pseudoaneurysm from the catheter or complete infarction of the right lung if the coils are mistakenly placed in the main PA instead of the pseudoaneurysm. This case report demonstrates proper recognition and treatment of RPAs.

Conclusions: Due to their rare prevalence, Rasmussen aneurysms are often overlooked. A retrospective study revealed that 38% of TB patients with re-bleeds subsequent to successful bronchial artery embolization for hemoptysis had RPAs. CT angiography is the best radiologic diagnostic method to identify RPAs, enabling prompt appropriate embolization.