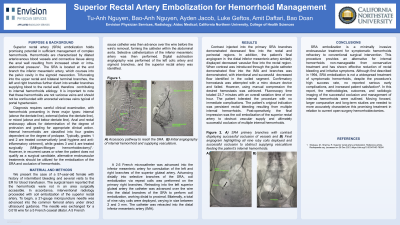 T.-A. Nguyen, B.-A. Nguyen, A. Jacob, L. Geftos, A. Daftari, B.-T. Doan
Purpose: Superior rectal artery (SRA) embolization has a role in managing complex cases of hemorrhoids. This minimally invasive treatment was first described in 1994 and has reemerged as an alternative for the treatment of intractable hemorrhoidal disease, particularly when refractory to standard therapy or when the patient is not a surgical candidate.

Material and Methods: We present the case of a 57 year-old female with a history of intermittent bleeding and several visits to the ER for blood transfusion. The surgical team reported that the hemorrhoids were not in an area accessible surgically. Interventional radiology proceeded with coil embolization of the superior rectal artery. She had a short hospital stay and did not have post embolization syndrome. She was seen one week later by surgery and all bleeding had stopped. On a one month telephone follow up, the patient reported no recurrent bleed and a high level of satisfaction.

Results: The right common femoral artery was accessed and a sheath was placed. A catheter was used to select the inferior mesenteric artery (IMA) followed by super-selectively catheterizing the distal portion of the superior rectal artery in this patient with classical anatomy. Bilaterally, a total of nine ruby coils were placed varying in size between 2 and 3 mm. Post angiogram showed successful reduction of flow to the hemorrhoids. The inferior rectal artery branches were intact, reducing risks of rectal ischemia.

Conclusions: SRA embolization is a minimally invasive treatment for symptomatic hemorrhoids refractory conventional treatment with effective reduction of rectal bleeding and irritative symptoms. Although first described in 1994, SRA embolization is not a widespread treatment of symptomatic hemorrhoids despite high success rate , patient satisfaction and no reported serious early complications. Larger comparative and long term studies are needed for this promising treatment.