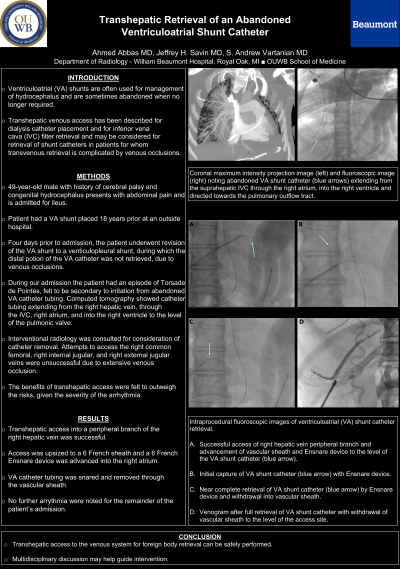 A. Abbas, J. Savin, S. A. Vartanian
Purpose: Ventriculoatrial (VA) shunts are often used for management of hydrocephalus and are sometimes abandoned when no longer required. Transhepatic systemic venous access has been described for dialysis catheter placement and for inferior vena cava (IVC) filter retrieval and may be considered for retrieval of shunt catheters in patients for whom transvenous retrieval is complicated by venous occlusions.

Material and Methods: A 49-year-old male with history of cerebral palsy and congenital hydrocephalus presented with abdominal pain and was admitted for ileus. The patient had a VA shunt placed 18 years prior at an outside hospital (OSH). Four days prior to admission, the patient underwent revision of the VA shunt to venticulopleural shunt at an OSH, during which the distal potion of the VA catheter was not retrieved, due to venous occlusions. During the current admission the patient had an episode of Torsade de Pointes, felt to be related to the catheter tubing. Computed tomography showed catheter tubing extending from the right hepatic vein, through the IVC and right atrium, and into the right ventricle to the level of the pulmonic valve. Interventional radiology was consulted for consideration of catheter removal. Attempts to access the right common femoral vein, right internal jugular vein, and right external jugular vein were unsuccessful due to extensive venous occlusion. The benefits of transhepatic access were felt to outweigh the risks, given the severity of the arrhythmia.

Results: Transhepatic access into a peripheral branch of the right hepatic vein was successful. The access was upsized to 6 French and a 6 French ensnare device was advanced into the right atrium. The catheter tubing was snared and removed through a sheath. The patient had no further arrythmia subsequent to the procedure.

Conclusions: Transhepatic access to the systemic venous system for foreign body retrieval can be safely performed.