(045) Barriers to Care in Guyanese Patients with Alcohol Withdrawal and Suicidal Ideation in the Medical Setting: A Case Series 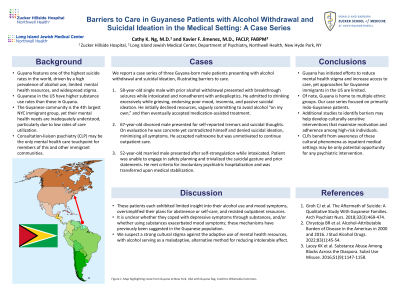 Background: Guyana features one of the highest suicide rates in the world, driven by a high prevalence of alcohol use, limited mental health resources, and widespread stigma (Groh et al, 2018). Guyanese in the US have higher substance use rates than those in Guyana (Chrystoja et al, 2022). The Guyanese community is the 4th largest NYC immigrant group, yet their mental health needs are inadequately understood, particularly due to low rates of care utilization. We have experienced that consultation-liaison psychiatry (CLP) may be the only mental health care touchpoint for members of this and other immigrant communities. We report three Guyana-born male patients presenting with alcohol withdrawal and suicidal ideation, illustrating barriers to care.

1. 58-year-old single male with prior alcohol withdrawal presented with breakthrough seizures while intoxicated and nonadherent with antiepileptics. He admitted to drinking excessively while grieving, endorsing poor mood, insomnia, and passive suicidal ideation. He initially declined resources, vaguely committing to avoid alcohol “on my own,” and then eventually accepted medication-assisted treatment.

2. 67-year-old divorced male presented for self-reported tremors and suicidal thoughts. On evaluation he was concrete yet contradicted himself and denied suicidal ideation, minimizing all symptoms. He accepted naltrexone but was unmotivated to continue outpatient care.

3. 52-year-old married male presented after self-strangulation while intoxicated. Patient was unable to engage in safety planning and trivialized the suicidal gesture and prior statements. He met criteria for involuntary psychiatric hospitalization and was transferred upon medical stabilization.

Discussion: These patients each exhibited limited insight into their alcohol use and mood symptoms, oversimplified their plans for abstinence or self-care, and resisted outpatient resources. It is unclear whether they coped with depressive symptoms through substances, and/or whether using substances exacerbated mood symptoms; these mechanisms have previously been suggested in the Guyanese population (Lacey et al, 2016). We suspect a strong cultural stigma against the adaptive use of mental health resources, with alcohol serving as a maladaptive, alternative method for reducing intolerable affect.

Conclusions: Guyana has initiated efforts to reduce mental health stigma and increase access to care (Groh et al, 2018), yet approaches for Guyanese immigrants in the US are limited. Additional studies to identify barriers may help develop culturally-sensitive interventions that maximize motivation and adherence among high-risk individuals. CLPs benefit from awareness of these cultural phenomena as inpatient medical settings may be only potential opportunity for any psychiatric intervention.