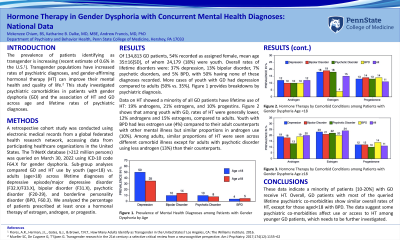 Introduction: The prevalence of patients identifying as transgender is increasing (recent estimate of 0.6% in the U.S.1). Transgender populations have increased rates of psychiatric diagnoses, and gender-affirming hormonal therapy (HT) can improve the mental health and quality of life of transgender individuals.2 This study investigated psychiatric comorbidities in gender dysphoria (GD) and the association of HT and GD across age and lifetime rates of psychiatric diagnoses.

Conclusion: While the prevalence of patients identifying as transgender is increasing, these data indicate a minority of patients [10-20%] with GD receive HT. Overall, GD patients with most of the queried lifetime psychiatric co-morbidities show similar overall rates of HT, except for those aged< 18 with BPD. The data suggest some psychiatric co-morbidities affect use or access to HT among younger GD patients, which can be further investigated.