(048) Implicit Bias and the Misdiagnosis of a Patient with Anti-NMDA Receptor Encephalitis: A Case Report 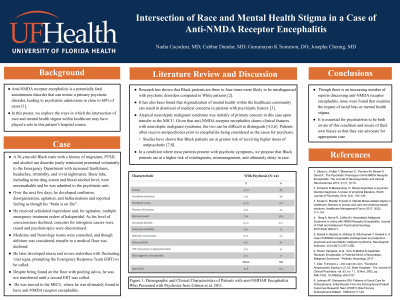 Anti-NMDA receptor encephalitis is a potentially fatal autoimmune disorder that can mimic a primary psychotic disorder, leading to psychiatric admissions in up to 60% of cases (Gibson, 2011). In this poster, we explore the ways in which the intersection of race and mental health stigma within healthcare may have played a role in this patient’s hospital course.

A 36-year-old Black male with a history of migraines, PTSD, and alcohol use disorder presented voluntarily to the Emergency Department with increased fearfulness, headaches, irritability, and vivid nightmares. Basic labs, including urine drug screen and blood alcohol level, were normal and the patient was admitted to the psychiatric unit. Over the next few days, he developed confusion, disorganization, agitation, and hallucinations and reported feeling as though his “brain is on fire”. He received scheduled risperidone and, for agitation, multiple emergency treatment orders of haloperidol. As his level of consciousness declined, concerns for iatrogenic causes were raised and psychotropics were discontinued. Medicine and Neurology teams were consulted, and though delirium was considered, transfer to a medical floor was declined. He later developed ataxia and severe sialorrhea with fluctuating vital signs, prompting the Emergency Response Team (ERT) to be called. Despite being found on the floor with pooling saliva, he was not transferred until a second ERT was called. He was moved to the MICU, where he was ultimately found to have anti-NMDA receptor encephalitis.

Research has shown that Black patients are three to four times more likely to be misdiagnosed with psychotic disorders compared to White patients (Schwartz, 2014). It has also been found that stigmatization of mental health within the healthcare community can result in dismissal of medical concerns in patients with psychiatric history (Knaak, 2017). In a condition where most patients present with psychotic symptoms, we propose that Black patients are at a higher risk of misdiagnosis, mismanagement, and ultimately delay in care.

Though there is an increasing number of reports discussing anti-NMDA receptor encephalitis, none were found that examine the impact of racial bias or mental health stigma. It is essential for psychiatrists to be both aware of this condition and aware of their own biases so that they can advocate for appropriate care.