Introduction: Transurethral Resection of the Prostate (TURP) is the gold standard of treatment for benign prostatic hyperplasia. Anticoagulant medications are increasingly common in this patient population that carries the risk of bleeding and complications. In this study, we aimed to assess post-operative outcomes after TURP in patient with increased bleeding risk.

Methods: ACS-NSQIP data was queried for patients who underwent TURP between the January 2005 and December 2016. History of bleeding disorder, patients on chronic anticoagulation that was not stopped prior to the surgery, INR above 1.1, PTT above 35 seconds, and platelet counts below 70,000 were used to classify patients as increased bleeding risk. Patients with and without increased bleeding risk were compared in terms of complications, return to operating room, and 30-day mortality. Multivariate logistic regression models were fit to evaluate variables associated with 30-day mortality after TURP. We used chi-square and t-tests for statistical analysis of categorical and continuous variables respectively. 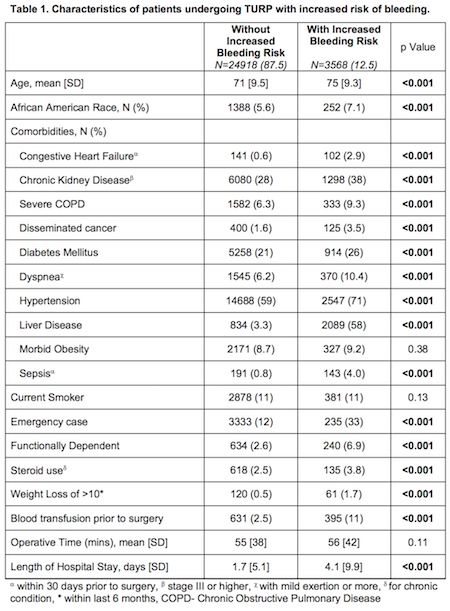 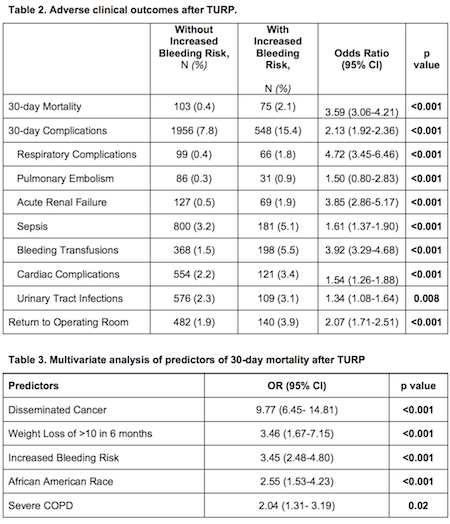