Introduction: Tranexamic Acid (TXA) is an indirect fibrinolytic inhibitor that was discovered in the early 1960s. TXA has been widely used in orthopedic and obstetric surgeries. Holmium Laser Enucleation of the Prostate (HoLEP) is a size-independent treatment option for enlarged prostates. Our group has previously shown that same-day discharge (SDD) and catheter removal and discharge is possible. However, hematuria remains the most common reason for SDD failure. Our aim was to determine if TXA administered at the time of HoLEP improves SDD rates. Herein, we present an interim analysis of this prospective randomized controlled trial.

Methods: IRB approval was obtained to initiate the trial and we began enrolling patients in a prospective, randomized controlled trial in Sept 2021. Patients were randomized to receive 1g of IV TXA at induction vs. control. Moses 2.0 was used for all cases. Our power analysis determined at least 98 patients should be enrolled to detect a 25% difference in SDD rate (we will plan to enroll 110 patients). Statistical analysis was performed using SAS Studio (2021).  Student t-tests and chi-square tests were performed for continuous and categorical variables, respectively.  A p-value of < 0.05 was deemed statistically significant.

Conclusions: In this interim analysis of a prospective, randomized controlled trial with limited follow up, TXA use in HoLEP seems promising with 100% SDD and same-day catheter removal rate.  As this is an interim analysis, several variables remain skewed, which we anticipate will equalize as enrollment accrues. 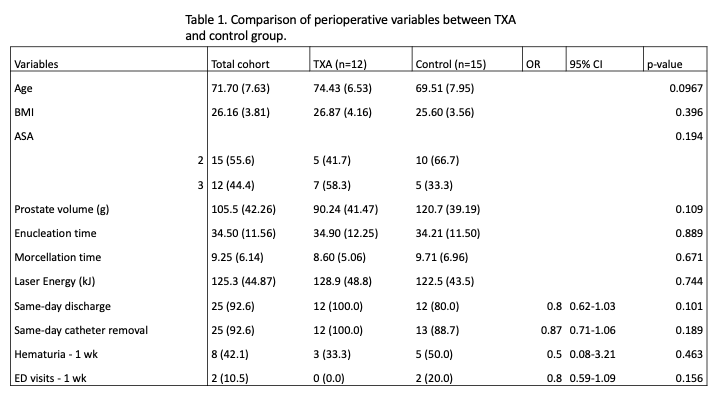