Introduction: Afferent nerve signals in response to bladder filling are a critical component in the normal micturition cycle. It is proposed that aberrations in signaling may be associated with voiding dysfunction. The purpose of this study was to develop a model to capture afferent nerve signals in perfused porcine bladders. To our knowledge this is a model that has not been previously reported.

Methods: Porcine bladders were harvested fresh from local abattoirs. Ex vivo bladders were stored in physiologic buffer solution and prepared for experimentation by intubation of vesicular arteries, ligation of bilateral ureters, and cannulation of the urethra with both a Urodynamics catheter and a length of 1/8 inch tubing (Figure 1A). Nerves were isolated and loop electrodes were placed to monitor signaling activity using an AD Instruments PL2604 Power Lab (Figure 1B). To preserve bladder integrity, vesicular arteries were perfused with physiologic buffer solution. Bladders were filled with deionized water from a volume of 0 to 1000 mL. Urodynamic tracings were monitored for pressure change with filling. Nerve fibers were monitored for propagation of electrical signals consistent with nerve firing.

Results: Three porcine bladders were used for this study. In all animals a phasic afferent signal was identified (Figure 2A). Bursts of activity were noted at an average volume of 351 cc. The signal occurred over a period averaging 4 seconds with a frequency of 8 hz and amplitude of 0.65mV. An additional signal (Figure 2B) was observed (n=1) where signal activity corresponded to filling volume (Figure 2C). Nerves emanating from the posterior aspect of the bladder (n=1) were isolated and confirmed using H&E immunohistochemistry. 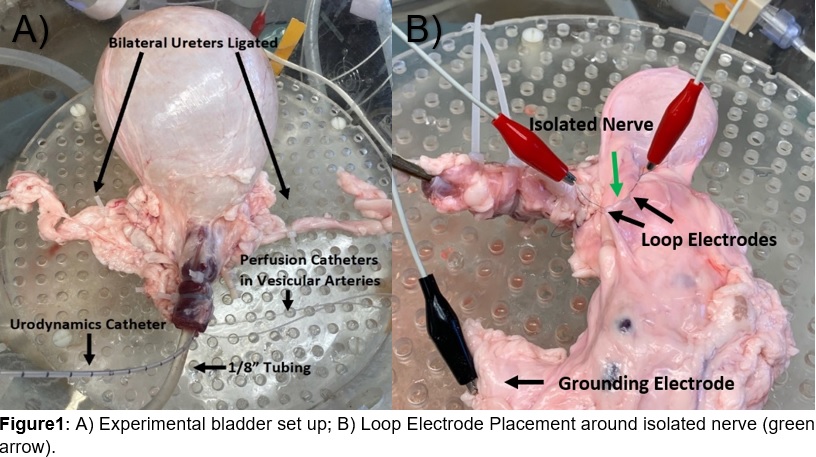 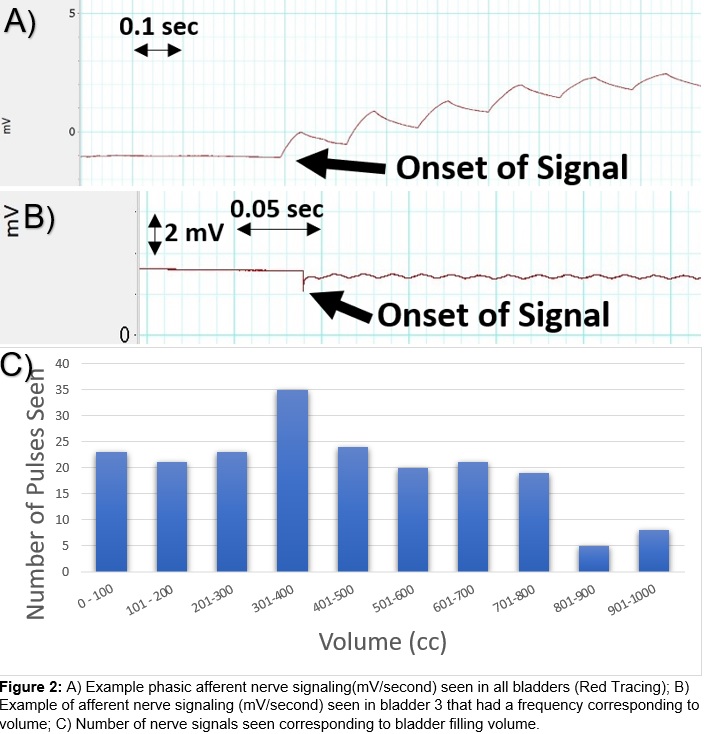