MP18-16: Voiding Time as a Proxy for Urinary Obstruction in Men with Lower Urinary Tract Symptoms

Introduction: We sought to investigate voiding time (VT) in asymptomatic and symptomatic men, and compare VT to other uroflowmetric parameters such as maximum flow rates (Qmax) as a possible solution to disparity related lack of access to more standard urodynamic testing in LUTS patients.

Methods: We conducted a controlled prospective study on a total of 30 patients. Adults age =18 were included. Exclusion criteria were those with ongoing medical therapy for LUTS or a history of invasive therapy for LUTS. Patients completed the International Prostate Symptom Score (IPSS) questionnaire, uroflowmetry, and post-void residual (PVR) testing. Symptomatic LUTS was defined as an IPSS =8.

Results: On univariate analysis, men with a symptomatic LUTS had a significantly longer VT than asymptomatic men (30.60 seconds (Interquartile rage [IQR] 24.2-42.4) vs 20.50 seconds (IQR 16.6-40.5), p=0.043). When controlling for all other factors, VT was not otherwise associated with age, race, or BMI. There was no significant difference in Qmax between symptomatic and asymptomatic patients (13.40 seconds (IQR 8.7-19.9) vs 20.5 seconds (IQR 11.7-31.8), p-0.07). No differences were found based on PVR (p=0.51). Our study also demonstrated that the sensitivity of a VT =23.5 seconds, or probability of observing a VT exceeding 23.5 seconds when the patient has a symptomatic IPSS, is 85%. On sensitivity and specificity analysis, there was no difference between the abilities of Qmax and VT to predict that a patient would have symptomatic LUTS (p=0.80).

Conclusions: We found that VT was as accurate as Qmax in predicting symptomatic IPSS scores. This novel finding can improve the ability to diagnose and treat LUTS, especially in primary care offices and underserved areas. 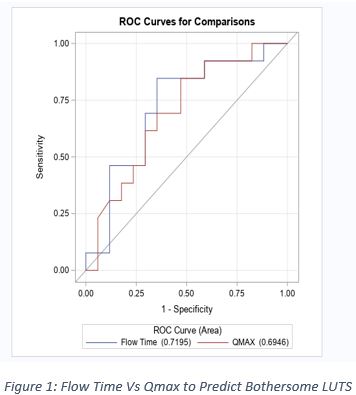