Introduction: Vasectomy is a widely utilized and reliable form of male contraception. There are historical ethical concerns surrounding vasectomy in childless men. Prior studies have shown no increase in this population seeking fertility restoration but there is no data looking specifically at the level of regret.

Methods: The records of patients who underwent vasectomy via single surgeon between 2006 – 2021 were retrospectively reviewed and those who had not fathered children in any capacity at time of vasectomy were selected. We devised a 6-question survey inquiring about regret and thoughts on vasectomy reversal and advanced reproductive technology (ART). The questions are listed in Table 1. Patients were asked to rate their level of regret, both immediately after vasectomy and present day. The cohort was analyzed via age at time of vasectomy, time since vasectomy and marital status.

Results: There were 4,812 overall patients who underwent vasectomy in this time interval, with 205 (4.3%) who were childless. The response rate was 33.2% (68/205). Average age was 36.6 years with average time since vasectomy at time of phone call was 5.51 years. A confirmatory, second consultation before vasectomy was present in 6.8% (14/205). The majority of patients 150/205 (73.1%) were married. When patients were stratified by marital status, there was no significant difference in any of the questions. The majority of patients were satisfied with their decision, with few contemplating or pursuing reversal or ART (Table 1).

Conclusions: Regret in childless patients who undergo vasectomy is very rare, with the majority of patients feeling that their life was improved. 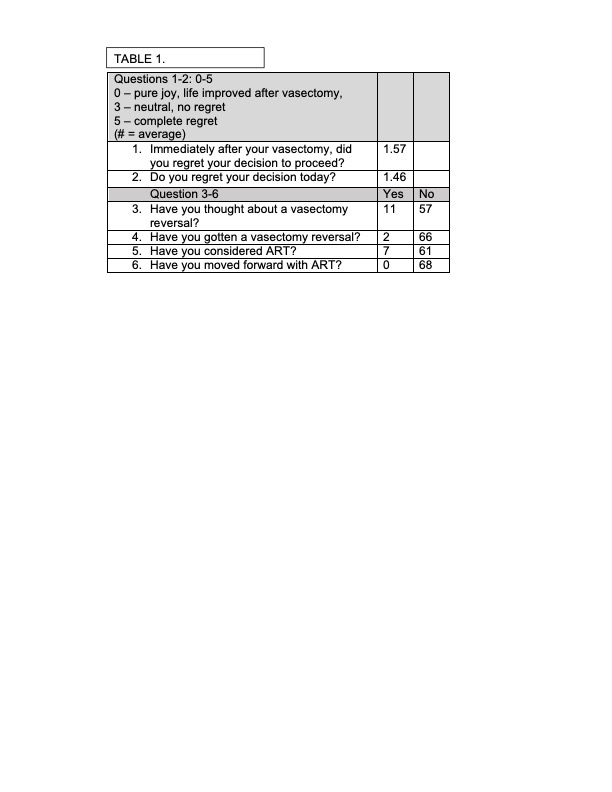