MP42-05: Use of Intravesical Chemotherapy in the United States Following Publication of a Randomized Trial

Introduction: The Southwestern Oncology Group (SWOG) S0337 randomized clinical trial (RCT) published in 2018 demonstrated that use of intravesical gemcitabine after transurethral resection of bladder tumor (TURBT) led to superior recurrence-free survival compared with placebo. However, it is unknown what impact this RCT had on rates of post-TURBT chemotherapy use. We studied the effect of SWOG S0337 on the rates of gemcitabine use after TURBT.

Methods: The Premier Healthcare Database was queried to capture index TURBT cases in the United States between January 2015 and March 2020 using Current Procedural Terminology codes. Billing data was acquired for gemcitabine or mitomycin C usage, and administration of each agent was calculated by month and plotted along with polynomial regression curves. Patient and hospital demographics were extracted, and multivariable logistic regression was used to estimate the odds of a patient receiving any post-TURBT chemotherapy before and after publication of the RCT in May 2018. A dissemination period from abstract presentation (May 2017) to print publication of the RCT (May 2018) was excluded from comparison.

Results: A total of 84,994 index TURBTs were identified from January 2015 to March 2020. Among all patients, 17.4% received post-TURBT chemotherapy, of whom 30.4% received gemcitabine. After publication of the RCT in May 2018, the rate of gemcitabine use in TURBT patients receiving intravesical chemotherapy increased from 0% before publication (not including dissemination period) to 5.3% in March 2020 (Figure 1). However, no increase was seen in the overall use of post-TURBT chemotherapy (odds ratio for likelihood of receiving chemotherapy post-publication: 0.97, 95% confidence interval: 0.93-1.01, p=0.11). Other factors like male sex, private insurance, and white race were significantly correlated with post-TURBT chemotherapy administration. Among 167 surgeons who used gemcitabine and who performed TURBT both before and after RCT publication, 149 (89.2%) had previously used mitomycin C, while 18 (10.8%) had previously not used any chemotherapy.

Conclusions: Use of post-TURBT gemcitabine significantly increased following publication of the SWOG S0337 trial. However, no change was seen in the overall rate of post-TURBT chemotherapy use. Most providers who administered gemcitabine had previously used another intravesical agent.

Source of Funding: There was no direct funding from an outside organization or sponsor. 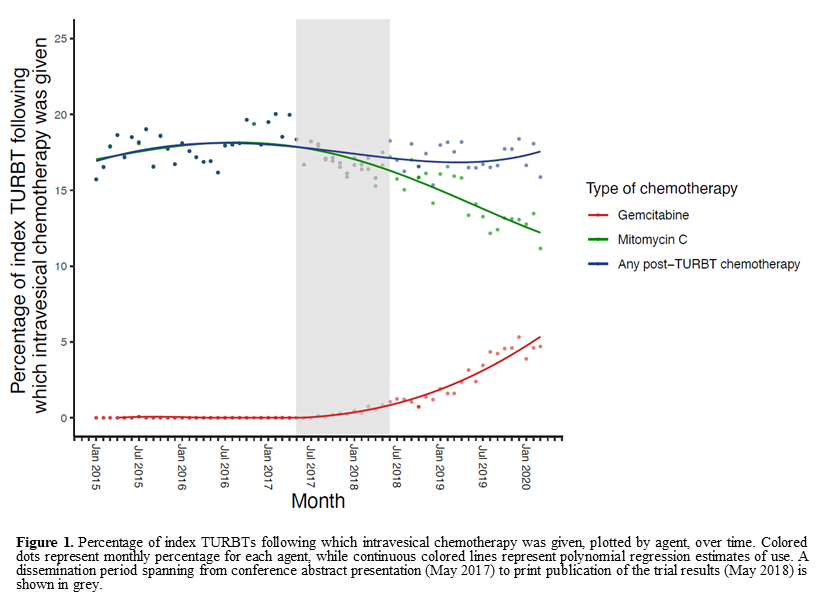