MP43-11: The Use and Outcomes of Men with NCCN Favorable Intermediate Risk Prostate Cancer Managed with Active Surveillance

Introduction: To describe the use of active surveillance (AS), factors associated with the selection of AS, and time on AS for men with NCCN favorable intermediate risk prostate cancer (FIRPC) managed with AS in the Michigan Urological Surgery Improvement Collaborative (MUSIC) registry.

Methods: We calculated the proportion of men with FIRPC that selected AS by year of diagnosis and contributing practice from 2016 to 2020. Selection of AS was defined as both 1) AS listed as the primary management strategy and 2) absence of treatment for at least 12 months post diagnosis. A multivariable logistic regression model was fit to assess for the association of clinical, demographic, and oncological factors associated with AS selection, including the use and result (reassuring [RA] vs. non-reassuring [non-RA]) of confirmatory tests (Genomics, MRI, repeat TRUS, and targeted biopsy). Kaplan-Meier curves were used to estimate treatment free probability for patients on AS in the entire cohort and stratified by patients without, with RA, and non-RA confirmatory test.

Conclusions: The use of AS for men with FIRPC has increased from 2016 to 2020, but there is notable variability in the proportion of patients with FIRPC selecting AS by contributing practices. Confirmatory tests may prove valuable in helping to select men and the intensity of surveillance for men on AS. 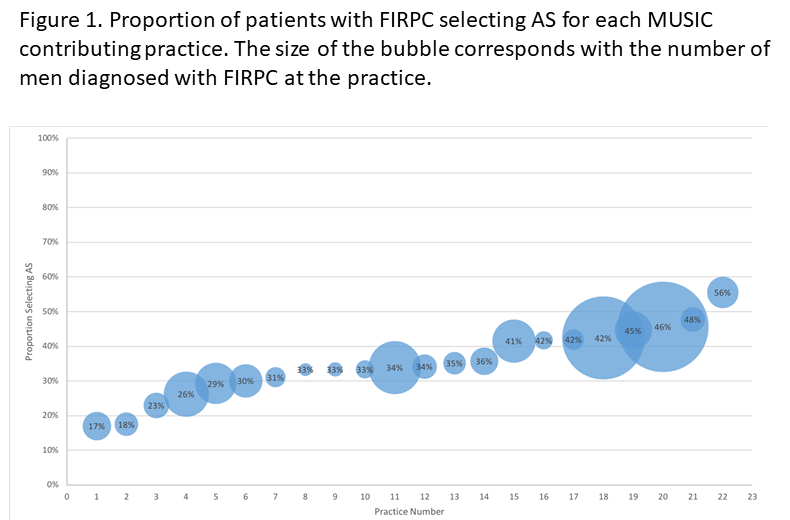