Introduction: The Photochemically-induced thrombosis (photothrombosis), which is easy to implement and minimally invasive, can create focal cerebral infarcts in the superficial layers of the cerebrum. Using this, we aimed to establish a new rat model of increases in urinary frequency after focal cerebral infarction, characterized by its simplicity, nonlethal nature, and high reproducibility.

Methods: A total of 90 11-week-old female Wistar-ST rats were assigned to the sham or photothrombosis-treated (PT) group. Photothrombosis was used to induce focal infarcts in the prefrontal and anterior cingulate cortices, which are involved in lower urinary tract control. A fiber optic cable delivering a light source was placed stereotactically onto the skull 1 mm anterior to the bregma on the midline. Rose Bengal solution (30 mg/mL/kg) was injected into the tail vein, and the skull was irradiated. Neurological, cystometric, and immunohistochemical evaluation of the brain were performed preoperatively and on postoperative days 1, 7, 14, and 28.

Results: Cystometric analysis indicated that micturition intervals significantly shortened in photothrombosis-treated rats compared with that in the sham group on Days 1 and 7 (P < 0.01), and prolonged after 14 days, with no difference between the groups (Figure A). Baseline pressure, micturition threshold pressure, and maximum intravesical pressure did not differ between the groups. Neurological evaluation revealed that only motor disturbances in the hind limbs improved with time in the PT group. Immunopathological evaluation revealed an accumulation of activated microglia, and subsequent increase in reactive astrocytes, at the peri-infarct zone after photothrombotic stroke. Throughout the study, all postphotothrombosis rats showed cerebral infarction in the prefrontal cortex and anterior cingulate cortex; no rats showed fatal cerebral infarction.

Conclusions: This novel photothrombosis model, combining non-lethality and high reproducibility, observed changes in micturition status. This photothrombosis method may be able to contribute to the understanding of neural control of urinary function by regulating the number and volume of the infarcted areas. 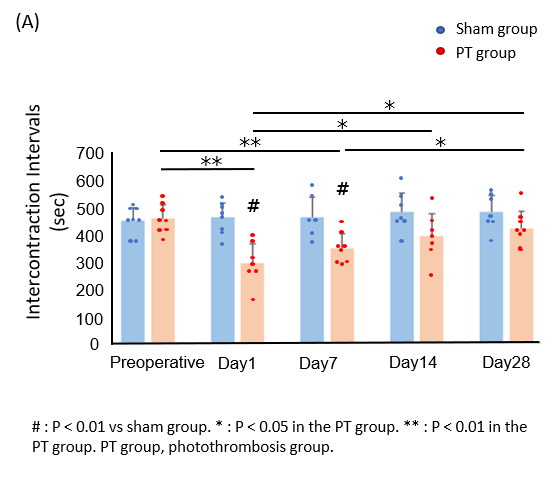