MP50-10: Risks and benefits of partial nephrectomy with limited or without ischemia time

Introduction: To achieve the shortest ischemia time[IT] during partial nephrectomy[PN] for renal mass is regarded as an optimal surgical outcome. However, the relationship between IT and renal function is not entirely elucidated and no consideration is given to potential detriments of zero-ischemia PN techniques. The hypothesis of the study states that IT might have a marginal impact on hard clinical outcomes and conversely might be associated with increased hemorrhagic risk

Methods: 1,140 patients treated with elective PN for a cT1-2 cN0 cM0 renal mass were prospectively assessed. IT was defined as the duration of clamping of the main artery of the kidney without any refrigeration. The primary outcomes of the study were renal function defined as postoperative, 6-month and long term eGFR, measured between 1 and 5 years after surgery and all-cause mortality. The secondary outcome of the study was haemorrhagic risk defined as estimated blood loss[EBL] and perioperative transfusions. Multivariable linear, logistic and Cox regression analysis[MVA] accounting for age, clinical size, preoperative eGFR and year of surgery were used and the potential non-linear relationship between IT and the study outcomes was modelled using restricted cubic splines

Results: The median duration of IT was 15. The rate of PN without IT was 24%. At MVA predicting renal function, longer IT resulted associated with decreased postoperative eGFR(Est -0.2; p<0.0001). Conversely, no association between IT and eGFR was recorded at 6 month or at long term follow-up nor any association between IT and mortality was recorded(all p>0.1). At MVA predicting hemorrhagic risk, IT resulted associated with EBL(Est -22; p= <0.0001) and perioperative transfusion(OR 0.99; p=0.002)

Conclusions: Patients and clinicians should be aware that performing PN with very limited or even without IT might increase bleeding and need for perioperative transfusions and does not improve long-term renal function nor affects mortality risk. The large study population represents a peculiar strength in the interpretation of such negative finding. These findings underscore the importance of other determinants of renal function, such as residual parenchyma and multidisciplinary postoperative management and advise to always prepare renal hilum during PN and to immediately clamp in case of bleeding

Source of Funding: no 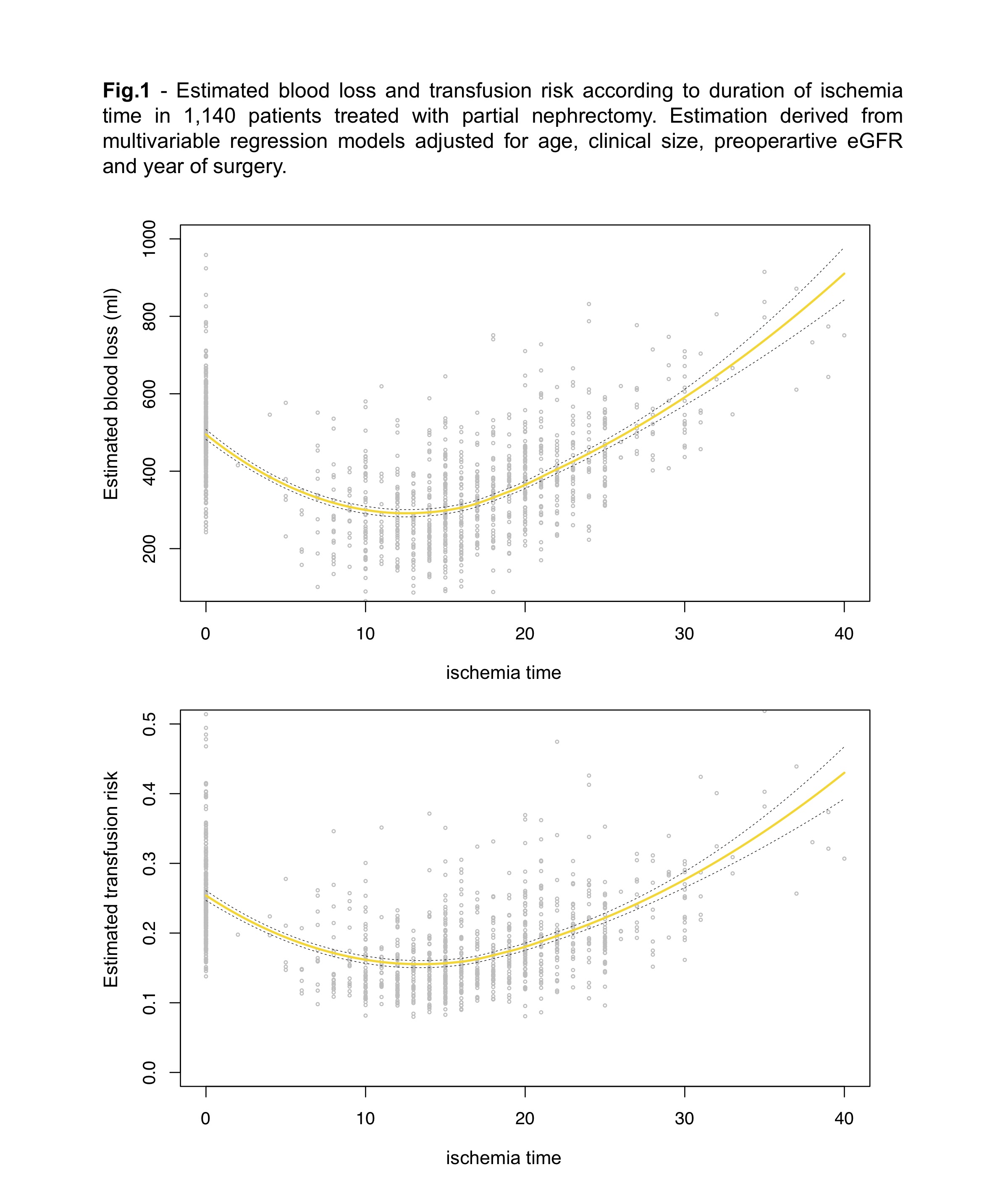