MP55-19: MRI alone is not an appropriate surveillance mechanism for patients after focal cryoablation for localized prostate cancer

Introduction: Cryotherapy is an attractive option for localized prostate cancer, but there is a dearth of literature on both outcomes and surveillance after therapy.

Methods: We performed a retrospective analysis of patients undergoing cryotherapy at a single institution. Inclusion criteria are: clinically localized biopsy proven cancer that is clearly visible on MRI or ultrasound and no known cancer abutting the urethra. Gleason 3+3 cancer in the contralateral lobe is also accepted. The cryotherapy protocol targets the specific lesion only. The follow up protocol for all patients includes PSA testing every 3 months followed by an MRI and biopsy at 1 year. The primary outcome is failure free survival (FFS) defined as treatment (transition to radical, whole-gland or systemic therapy), metastasis, or death due to disease. Secondary outcomes include post cryotherapy changes in Gleason grade group (GG) and MRI findings.

Conclusions: Focal cryotherapy is effective for treating focal lesions of prostate cancer, but patients need to be followed. MRI alone is not effective at ruling out residual disease in the post cryoablation setting. PSA rises faster in patients who do not remain on active surveillance.

Source of Funding: Goldberg-Benioff Program in Translational Cancer Biology in the UCSF Department of Urology 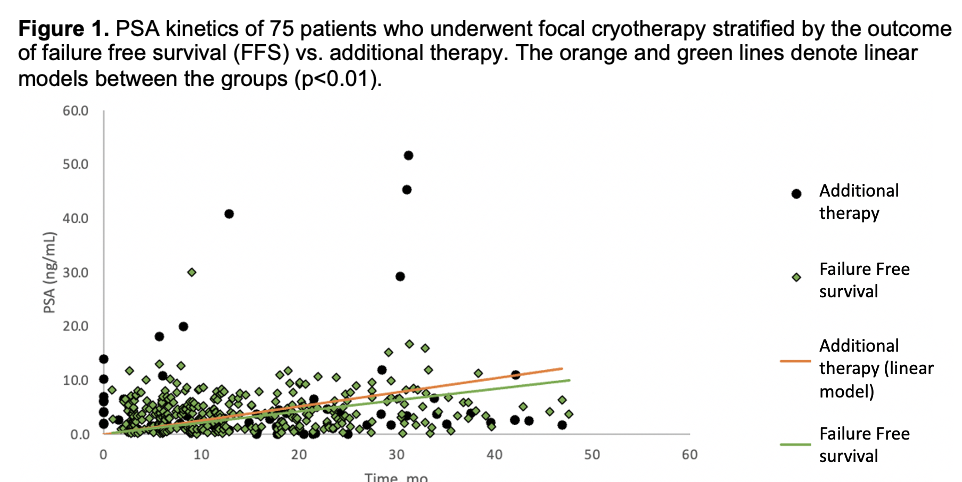