Introduction: To mitigate the risks of unnecessary biopsy and over-diagnosis of low-risk prostate cancer (PCa), risk calculators (RC) were developed using retrospective data either from screening cohorts, like the Prostate Cancer Prevention Trial (PCPT) or biopsy cohorts, like the Prostate Biopsy Collaborative Group (PBCG). RCs were created or validated with relatively few Black men. Research has shown that RCs perform poorly in Black men, with the PCPT outperforming the newer PBCG. We sought to develop and validate an RC for the detection of clinically significant PCa and compare it against the PCPT 2.0.

Methods: Using data from a prospectively-recruited cohort of men undergoing prostate biopsy at one of five facilities in Chicago from 2009-2014, we excluded non-Black patients and those with PSA >50ng/ml and split them into development (70%) and validation (30%) cohorts. We used binary logistic regression to develop 2 models to predict the detection of clinically significant PCa (Gleason Grade Group = 2 vs. GG1 or negative biopsy). The tailored RCs were assessed for accuracy internally and compared to PCPT RC, using area under the receiver operating characteristics curve (AUC).

Results: A total of 393 Black men were included, with 121 (30%) having clinically significant PCa. The PCPT had an AUC of 0.626 in our data set. Figure 1 shows Model 1, which used log-base 2 transformed PSA and prostate volume as continuous variables, and prior negative biopsy and abnormal digital rectal exam (DRE) as binary categorical variables. This model outperformed the PCPT with an AUC of 0.764 (p < 0.0001). Model 2 used publicly funded site instead of prostate volume, and also outperformed  PCPT with an AUC of 0.704 (p=0.01). The covariates in both models are listed in Table 1.

Conclusions: Tailoring a risk calculator for the detection of clinically significant PCa to Black men can result in better accuracy than the preceding tools that were developed in non-Black populations. Further iterations can improve accuracy with incorporation of modern diagnostic methods like MRI and other biomarkers. 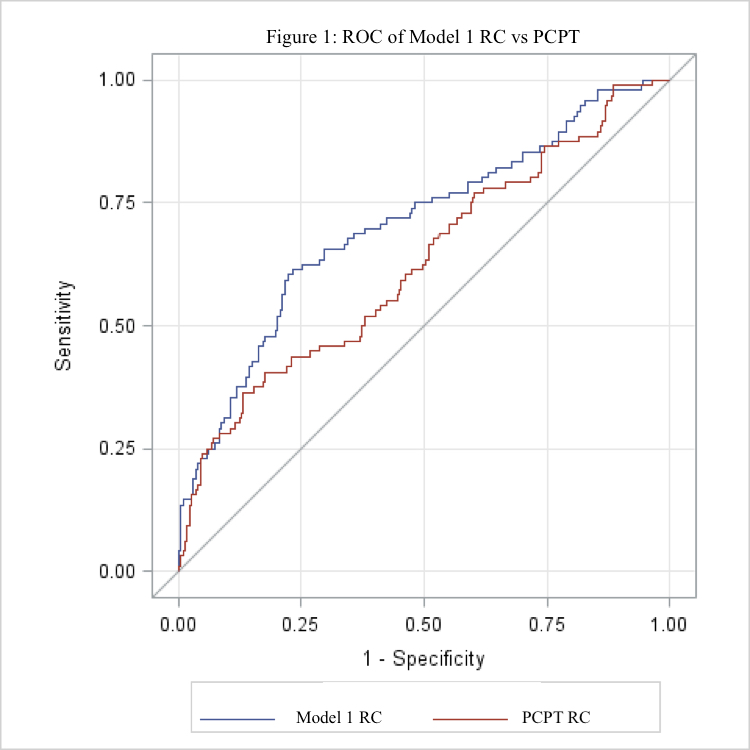 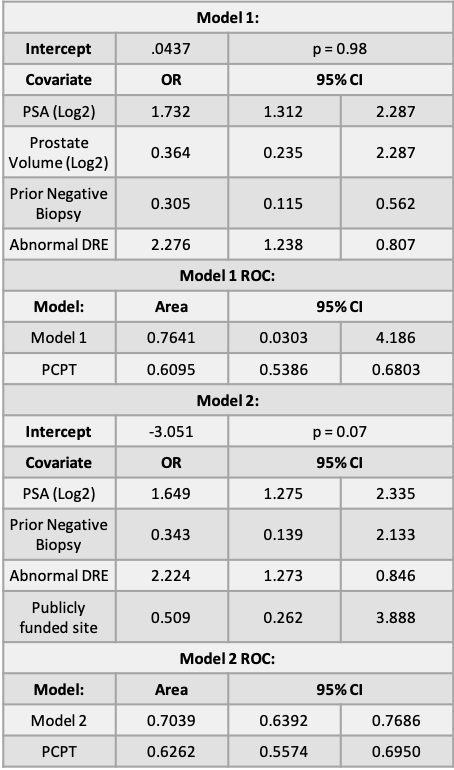