Introduction: Financial toxicity, the material and emotional strain caused by financial distress from a medical condition and its treatment, has adverse effects on patient physical health, clinical outcomes, and overall well-being. This concept is widely studied in adult oncology, where the COmprehensive Score for financial Toxicity (COST) is an established patient-reported outcome measure (PROM) that assess financial toxicity in adults with cancer. Financial toxicity has not been assessed in congenital conditions, such as spina bifida (SB) – the most common permanently disabling birth defect in the United States. This is in part due to the absence of an instrument specific to this population. Thus, our aim was to develop a SB-specific financial toxicity PROM (SBFT-PROM) for individuals with SB and their caregivers.

Methods: We conducted semi-structured interviews with individuals affected by SB and/or their caregivers with the aim of identifying common themes related their financial distress. Interviews were transcribed and thematic analysis was performed to identify recurring themes. These insights were used to create a conceptual framework and guide the development of the SBFT-PROM.

Results: A total of 14 interviews were conducted. Average patient age was 17.9 years. Five dominant themes were identified: affect, direct costs, indirect costs, coping, and resources. These insights, along with prior studies of financial toxicity in oncology patients, were used to create a conceptual framework (figure). The themes identified were similar to themes identified during the development of the COST measure. Thus, we adapted the COST measure to create two versions of SBFT-PROM – one for individuals with SB and one for caregivers.

Conclusions: We developed a conceptual framework of financial toxicity for individuals with SB and their caregivers. This framework and the previously established COST measure were leveraged and adapted specifically for SB, creating the SBFT-PROM. This work has allowed us to begin validation of SBFT-PROM in our clinic prior to employing it in a clinical or research setting. The ability to quantitatively measure financial distress from SB will enhance clinicians’ efforts to deliver patient-centered care and improve clinical outcomes. 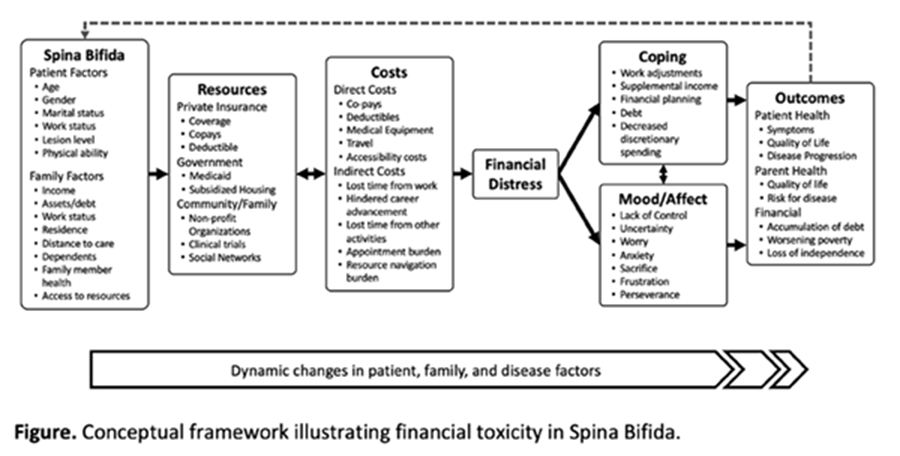