Introduction: In order to critically evaluate long-term functional outcomes of adrenal surgery for primary aldosteronism (PA), several predictive scores have been recently conceived. We compared a novel trifecta system that summarizes outcomes of adrenal surgery for Conn’ syndrome regardless the surgical technique with the standard clinical cure criteria proposed by Vorselaars.

Methods: A multicenter minimally-invasive adrenalectomy dataset was queried for “unilateral adrenal mass” and “primary aldosteronism (PA)” at 4 participating institutions between 2011-2021.  Clinical and biochemical complete, partial and absent success rates according to PASO criteria were assessed for the overall cohort. Trifecta was defined as the coexistence of =50% antihypertensive therapeutic intensity score (TIS) reduction (?TIS) and no electrolyte impairment at 3-months after surgery, no Clavien-Dindo (2-5) complications. Probability of absent clinical success according to non-achievement of trifecta and clinical failure were estimated by Kaplan-Meier method, respectively. Cox regression analyses were used to identify predictors of long-term clinical success. For all analyses, a two-sided p<0.05 was considered significant.

Conclusions: Compared to clinical cure, trifecta can be used to differentiate patients who are likely to achieve a stable and complete clinical success after partial and total adrenalectomy from those who will need continuous surveillance after treatment due to persistent or refractory hypertension on the long run 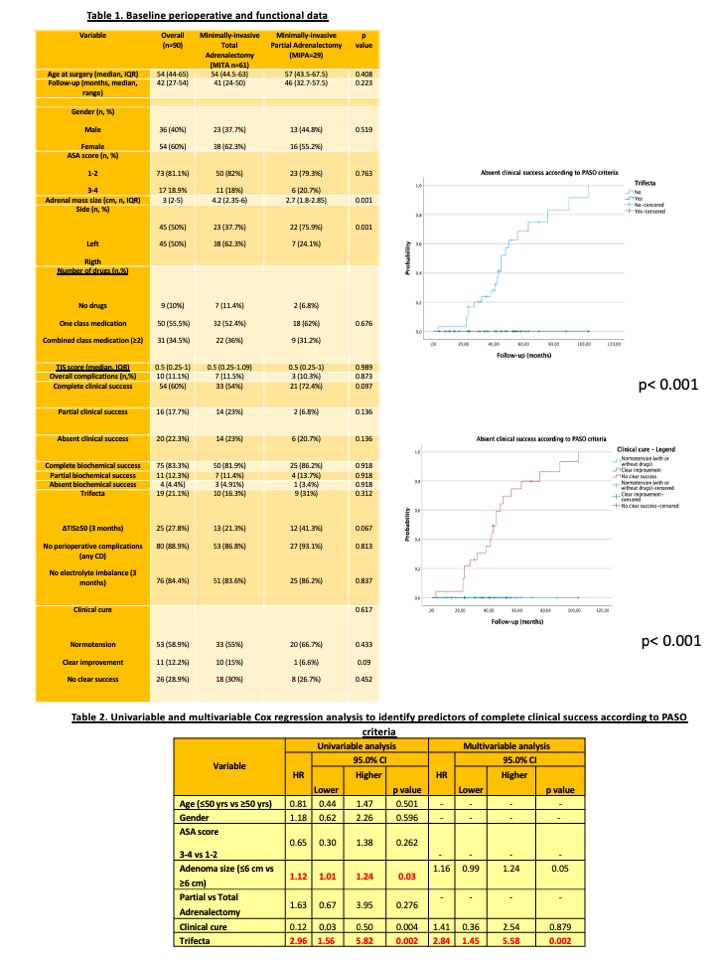