Introduction: In 2006, Ananias Diokno and is team reported what remains to date the only series comparing male vs female artificial urinary sphincter (AUS) implantation suggesting better functional outcomes and longer device survival for female implantations (Petero VG, J Urol 2006). We hypothesize that the rapidly spreading robotic approach for female implantation may have changed this comparison. The aim of this study was to compare the outcomes of robotic female AUS vs male AUS implantation for non-neurogenic SUI.

Methods: The charts of all male patients who had an AUS implantation and of all female patients who underwent robotic AUS implantation between 2008 and 2020 for non-neurogenic SUI at a single center were reviewed retrospectively. All the implantations were performed by three surgeons in their learning curves over the study period. All the female implantations were performed using a robotic “anterior” transperitoneal approach. The primary endpoint was the continence status at 3 months categorized as: complete resolution of SUI (0 pad), improved SUI or unchanged SUI. 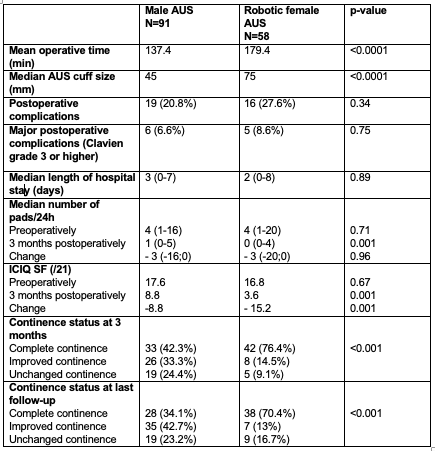