Introduction: In patients with high grade Ta and T1 urothelial carcinoma of the bladder, restaging TURBT is recommended due to the high rate of residual tumors and upstaging. Blue light cystoscopy (BLC) using hexaminolevulinate (HAL/Cysview) has been shown to improve detection of non-muscle-invasive bladder cancer (NMIBC).  We hypothesized that use of BLC at the time of initial TURBT improves complete resection rates and reduces risk of upstaging. Consequently, patients who undergo initial TURBT with BLC may not require restaging TURBT thus reducing patient morbidity and resource utilization.

Methods: Using the multi-institutional Cysview registry between 2014 and 2021, all consecutive adult patients with known non-muscle-invasive bladder cancer (Ta and T1 disease) who underwent TURBT followed by a restaging TURBT within 8 weeks were reviewed. Patients were stratified according to their initial TURBT, BLC versus white light (WLC) TURBT, and compared to determine rates of residual disease and upstaging to muscle invasive disease. Univariate analysis was performed using Mann-Whitney U and Chi-Square tests, with p<0.05 considered significant.

Results: Overall, 123 patients had TURBT for NMIBC followed by a restaging TURBT within 8 weeks and were included in the analysis (Table). Patients who underwent BLC for their initial TURBT had higher rates of benign pathology on their restaging TURBT compared to WLC, although this was not statistically significant (47% vs 33%; p=0.2). Of patients with residual tumors on restaging TURBT, there was no significant differences in rates of Ta (23% vs 24%; p=1.0), T1 (23% vs 24%; p=1.0), or CIS (3% vs 15%; p=0.9) when the initial TURBT was done using BLC/HAL compared to WLC. Rates of upstaging to muscle invasive disease were also not different when initial TURBT was performed using BLC/HAL compared to WLC (3% versus 4%; p=0.8). 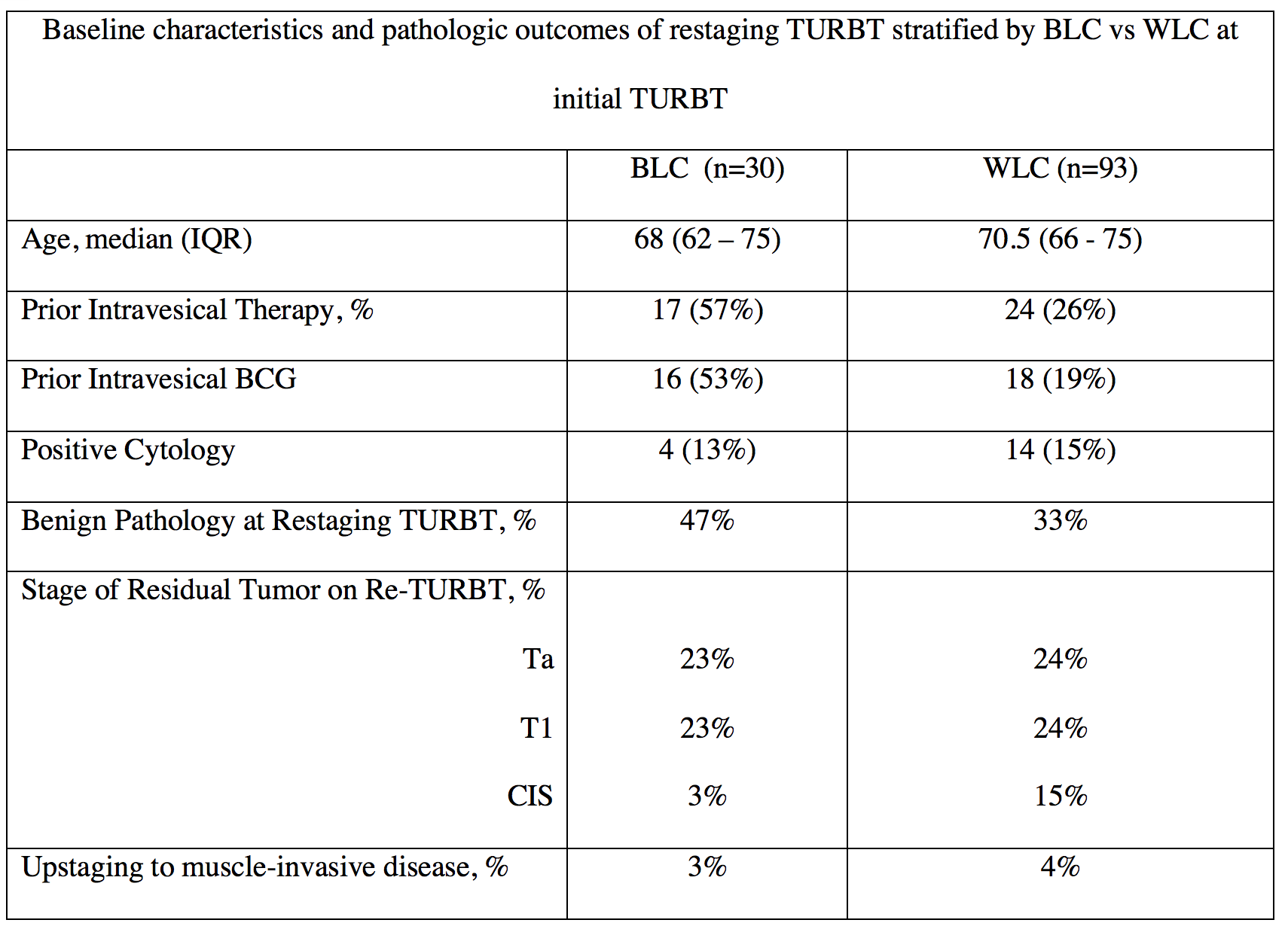